The shipping industry continues to scrap vessels at extremely high rates, and while some (like Maersk Group CEO Soren Skou) believe such tactics to cut capacity is helping to raise shipping rates, the trend also reflects basic economic principles and the industry’s turn toward larger vessels instead of the popular panamax-class ship.

An analysis of Alphaliner’s data reveals the top 10 carriers only owned  a combined 1,000 ships, which can carry a total 6.5 million TEU, whereas the carriers charter 1,573 vessels for roughly 7.6 million TEU.  The large difference in number of shifts coupled with a slight difference in capacity reflects a large-carrier preference for larger vessels: on average the top 10 carriers own vessels with roughly a 6,500 TEU capacity while they charter panamax-sized vessels of roughly 4,817 TEUs.  Meanwhile, the carriers’ orderbooks reveal, on average, they are investing, on post-panamax class ships of 12,000+ TEUs, which would provide the combined carriers 263% more capacity than is currently chartered.

In other words, non-vessel operating carriers are being faced with the challenges of both industry consolidation at the top and the economic challenge of fluctuating rates described by report. However, there may be a light at the end of the tunnel: as the industry consolidates at top, those left behind are being forced to move away from global trading lanes into a more regional presence, where panamax vessels may still thrive.

Regardless, the high scrapping rates lead to another, often unanswered question: what happens to the materials left behind after a ship is scrapped?

A recent town hall held by the U.S. Maritime Administration reveals that, at least in the U.S., ships are being recycled as the most cost-efficient method of vessel displacement.  That is because, unlike other methods such as sinking to create artificial reefs, recycled metals from these thousand-ton vessels can be sold as raw steel and boost the industry, creating an additional source of supply for the nation’s metal needs. 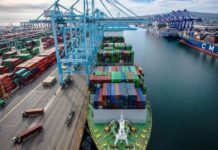