Gard explores the modern day training regime of seafarers with Oliver Bailey, a 25 year old on his way to be a Deck Officer. Let’s take a look at his insights of seafarers’ training.

For what could be better than knowing it from a seafarer himself.

The Life At Sea

For the past two years, Oliver Bailey has done a deep-dive into nautical science, navigation, firefighting, and many of the other subjects required to become a competent mariner. Not to mention: he’s been stuck at sea.

If all goes well the 25-year old will graduate before the end of the year, becoming a fully licenced Merchant Navy Deck Officer. At that point, a world of opportunities will await him, and thanks to a Gard scholarship, he’ll be able to start his career both debt-free and with some extra money in his pocket – a different position than most graduates find themselves in when finishing their education.

So why don’t more young people follow in Oliver’s footsteps?

Look to the sea

For Oliver, he probably decided several years ago. As a young teenager he used to gaze out to sea, watching the waves hit the beaches of his hometown Swansea in Wales, UK. He soon joined the local lifeguard club, and later started working for the Royal National Lifeboat Institution (RNLI), learning about radio communications and interacting with the coastguard, increasing his knowledge about working at sea.

Eventually he decided to apply to Chiltern Maritime, a UK-based crewing agent and provider of marine cadetships. He was accepted and became part of the Maritime London Officer Cadet Scholarship (MLOCS). Through sponsors and corporate and individual donors (supplemented by government SMART funding), the MLOCS sets out to train the ‘next generation of Merchant Navy officers’. Oliver ended up liaising with one of its donors – he became the ‘Gard cadet’. The Chiltern-organized program combines college studies at various UK-based academic institutions with practical training and seafaring experiences onboard a variety of commercial vessels. Oliver started out at Warsash Maritime School, part of Solent University in Southampton, learning the basics of seafaring, studying lifesaving, firefighting, stability, the fundamentals of being onboard a ship. Then, based on theory, he could move on to practice.

His first seagoing phase was onboard the Arklow Forest, a 3,000 tonne general carrier sailing from Norway to the South of Europe. It took some time getting used to ‘the seafarer lifestyle’, Oliver admitted, but it was all ‘good fun and hard work’. They sailed from Norway to France, Spain and Morocco, while Oliver shifted between the heavier manual work on deck, chipping away cement in foggy weather, to the more comfortable watches on the bridge, learning the dos and don’ts of navigation.

He then served on the Baltic Klipper, a 13,000 tonne cargo ship trading between Europe and South America. This was exciting – a bigger vessel, a longer journey, and of course the prospect of cruising into those famous Caribbean sunsets. Oliver was eager to stay onboard for as long as possible, maybe 5-6 months if he could, to get more sea time.

As fate would have it, Oliver ended up spending a longer stretch on the Klipper than he had planned. Due to the Covid-19 pandemic, all shore leave was cancelled, and the crew of 21 all had to stay onboard. A disappointment , of course – those strolls on the beach would simply have to wait for another time.

With his latest placement, the challenge was similar, yet different: he was now stuck more in port than at sea. Placed on the Fred Olsen Balmoral cruise ship, dazzling with swimming pools and high-end restaurants, the experience could easily have been a glamorous one. But the pandemic has of course led to an almost complete standstill of cruise tourism, and the Balmoral stayed in port for all of Oliver’s placement. Instead of cruising across the world oceans, he did repairs and maintenance work, waiting for better times. The pandemic and its setbacks aside – Oliver and his fellow cadets will probably have a wealth of opportunities waiting for them when they graduate. The shipping industry has long struggled with seafarer shortages. Competition has often been fierce for trained and competent workers, and although recruitment has improved over recent years, the latest manpower report from BIMCO/ICS (2016) warned there could be a serious shortage in the supply of seafarers in the years to come. A new report with updated forcasts is expected to be published later this year.

As for Oliver, he feels confident and ready for the future. He has learned a lot, and even has that signature ‘seafarer beard’ so often associated with experienced mariners.

‘I would say this whole experience has taught me that I am capable of doing anything if I put my mind to it’, he says. ‘I have been achieving results in college that I have never achieved before, and I have had experiences only a select few will ever have. I mean, who can honestly say they’ve steered a 15,600 tonne vessel with most likely a few million pounds worth of cargo through a port and moored her alongside without a scratch!’

So would he recommend other young people to go for a maritime career? ‘Oh, definitely. There’s a whole world waiting.’ 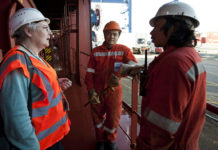 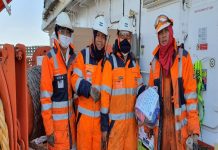 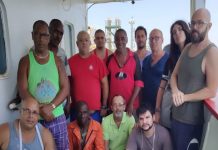 Highest Number of Seafarer Abandonment in 2020