Dense, low-sulfur oil, known in industry parlance as heavy sweet crude, is fetching increasingly stronger prices relative to benchmark lighter grades. For example, Angola’s Dalia traded at just 10 cents below Brent oil last month, up from a discount of $4.50 in January 2016, according to S&P Global Platts. The Australian Pyrenees traded at $4 more than Brent, its widest premium in more than three years, according to trading sources. 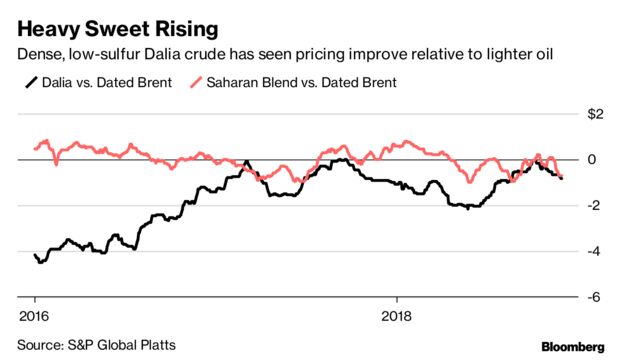 The shifting values are indicative of the powerful forces that are pulling apart long-held relationships between oil prices around the world, in particular, the U.S. shale boom and an overhaul of marine fuel regulations.

An alternate source of fuel

Heavy sweet crude has come into favor because it yields a lot of diesel and low-sulfur fuel oil when it’s refined. Those fuels are seen coming into heavy demand as new rules due to take effect in 2020 mean ships will use them more as an alternative to high-sulfur fuel oil, which is produced readily from sour crude. What’s more, lighter prices are under pressure because of a glut of U.S. shale oil and the gasoline it yields in abundance.

Martijn Rats, an analyst with Morgan Stanley, said: “What’s really in the sweet spot are heavy sweet crudes, which is offshore Angola and Brazil. Those should trade very strongly, but it’s a relatively small part of the oil market”.

Only about 500,000 barrels a day of heavy sweet oil are exported globally, accounting for just 1 percent of total seaborne trade, according to Matt Smith, director of commodity research at ClipperData LLC. Angola, Brazil and Chad are among the biggest sources.

Driving the focus on crude quality is the spread between the two most prevalent oil products, gasoline and diesel, which historically have had similar values. Gasoline futures in New York tumbled in November to nearly $25 a barrel less than diesel, the largest discount since 2014. 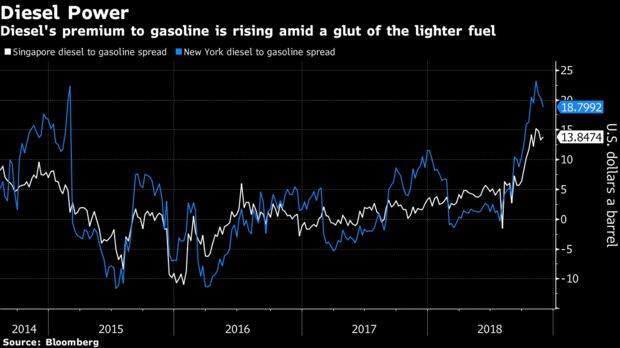 Most of the growth in crude production in recent years has come in the form of light shale oil in the U.S., while heavier exports from Iran and Venezuela are in decline because of sanctions and political disarray. That’s helped boost gasoline production and sent stockpiles of the fuel in the U.S. to a record seasonal high.

Mr.Rats said, “This mismatch between the crude we make and products that we need is going to be a feature going forward. My sense is that the excess in the gasoline market is here to stay for at least a while to come.”

The International Maritime Organization regulations set to go into effect at the start of 2020 will limit the amount of sulfur in marine residual fuel. That means that many of the world’s more basic refineries will choose to run low-sulfur oil, including Dalia and Pyrenees.

Andy Lipow, president of Lipow Oil Associates in Houston said, “Those low sulfur, heavy sweet crude oils will now have a greater value to the refining market as the residual portion of the crude oil will see new demand. The heavy, sweet oils that should benefit from this make up a small fraction of overall crude production, but the trend will also impact larger swaths of the market. Europe’s Brent crude tends to produce more diesel than West Texas Intermediate, so its premium to the U.S. benchmark should grow, Rats said. Middle Eastern benchmark Dubai, which is high in sulfur, should weaken relative to Brent in the second half of 2019″.