No incentive to change behavior

Only a handful of companies control capacity in each of these three groups. And in each case, the current market situation is enormously profitable, removing incentives to compete more on price.

According to data from Alphaliner, the top eight liner companies now control 81% of global capacity. Ghesquiere noted that prices obtained by shipping lines “are extremely high … [and] there is still plenty of cargo waiting to be shipped in Asia, so shipping lines really are in an environment where there is absolutely no need to change their behavior.”

The same goes for container equipment factories, virtually all of which are in China. Following recent consolidation, the top three Chinese builders produce 83% of all new boxes. “They are charging expensive prices for their containers,” said Ghesquiere. “They have a vested interest in maintaining the high pricing levels, so we really can’t see why manufacturing prices would drop. They have no incentives to change behavior.”

The pattern repeats yet again in the container-equipment leasing sector. Following recent consolidation, the top five players control 82% of the world’s leasing capacity. “Likewise, there is no risk here that the major players would suddenly change their behavior,” maintained Ghesquiere.

Add it all up and it equates to a grand total of just 16 companies — eight liners, three factory groups and five box lessors — that control over 80% of container-ship capacity, box-production capacity and box-leasing capacity. Shareholders of each of these 16 companies would benefit financially if today’s high pricing persists.

Ocean carriers have been busy placing orders for new ships, whether directly on their own accounts or indirectly through chartered tonnage ordered by vessel-leasing companies.

The orderbook has more than doubled since last year, but the new ships won’t hit the water until 2023-24, offering no relief to U.S. cargo shippers in 2022.

As the new ships are being built, leading liner companies are acquiring secondhand tonnage, further consolidating the market.

Five months ago, these eight carriers had 19.7 million twenty-foot equivalent units of capacity on the water. Since June, they added 435,236 TEUs of capacity, bringing their combined fleet to 20.1 million TEUs and their market share to 81.1%. The net gain since June was driven entirely by increases in owned tonnage as opposed to new charters (the charter market is largely sold out), with MSC leading the charge as it continues to buy an unprecedented number of secondhand vessels.

The largest liner companies are set to further increase their market dominance in 2023-24 when newbuilds are delivered, to the extent deliveries are not counterbalanced by lease expirations and scrapping of older tonnage.

According to Alphaliner data, Maersk’s orderbook totals 6% of its on-the-water capacity, CMA CGM’s orders-to-fleet ratio is at 17%, HMM and Cosco 20%, ONE 21%, Hapag-Lloyd 23%, MSC — which is far outpacing Maersk and is destined to become the world’s leading carrier — 24%, and Evergreen a whopping 48%.

Liner shipping’s consolidation transpired amid the loss-making market of the past decade, setting up surviving carriers to reap the benefits of the COVID-era surge in consumer demand.

As Vespucci Maritime CEO Lars Jensen told American Shipper in a previous interview, “We have definitely seen the effects of consolidation. At least on the main trades, there is a de facto oligopoly, which means the carriers are able to somewhat better prevent the price wars we’ve seen in the past. This is the logical end point of 20 years of gradual consolidation.”

As consolidated as liner shipping is, its market concentration pales in comparison to the box-manufacturing sector.

As previously reported by American Shipper, container manufacturing is dominated by a small number of Chinese businesses, most with ties to the state. The dominance of the top three is increasing. Dong Fang hiked its capacity in 2019 by purchasing factories from one of the smaller players, Singamas. This September, CIMC agreed to buy Maersk Containers for $1.08 billion including assumed debt. The deal is expected to close by year-end, giving CIMC another 1.2% of market share and bringing the top three’s share of H1 2021 production to 83.3%.

Chinese box manufacturers are producing a record number of containers this year. Textainer predicted that production would exceed 6 million TEUs, while container equipment lessor Triton (NYSE: TRTN) estimated around 5.4 million TEUs. The previous record, according to Drewry, was 4.4 million TEUs in 2018.

Even so, China’s top three are protecting their pricing and not flooding the market with excess containers. The cost of a new container remains at an all-time high of around $3,800 per TEU.

According to Ghesquiere, “There’s only three major manufacturers. When they can’t get enough orders, they prefer to reduce production and working hours at the factories [versus reducing pricing]. That’s certainly a sign that they are not changing their behavior.”

Containers used to move ocean cargo are owned by liner companies or by equipment lessors. Textainer puts the split at around 50-50.

Among equipment lessors, Bermuda-domiciled Triton is the largest, with 25% of leased capacity, according to an investor presentation this month by Textainer. Triton rose to the top of the pack after a merger with TAL in 2015.

Bermuda-domiciled Textainer is in second with an 18% share. Next in line with 14% are Florens, owned by China’s Cosco, and also with 14%, the combined holdings of CAI and Beacon. The owner of Beacon, Japan’s Mitsubishi HC Capital, acquired CAI (NYSE: CAI) for $1.1 billion in a deal that’s expected to close this quarter. Rounding out the top five is Seaco, controlled by China’s HNA, with an 11% market share. Comparing market concentration in container leasing to the liner business and container manufacturing, Ghesquiere said, “It’s pretty much a similar environment — we have five main players.

“Leasing companies haven’t necessarily gouged customers in terms of the prices [but lease] durations have certainly been extremely positive and yields have been attractive. The inventory levels of most [leasing] players are extremely low, with everybody enjoying utilization rates above 99%. So it would take quite a few quarters until we would potentially see a change in behavior here.” 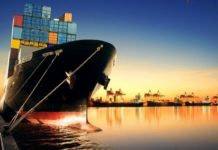