A new report from the International Council on Clean Transportation tracked air and water pollution from Singapore’s bunker sector, and urged a shift to renewable fuels says Seatrade Maritime.

Using data from 2019, the study developed a methodology to identify where bunkering occurs and track the resulting pollution. Focussing on Singapore accounting for around a fifth of global marine fuel sales in 2019. The study found that “residual marine fuel sales in Singapore leave a global air, water, and climate pollution footprint.” Highlighting the difficulty of tracking and assigning emissions from international shipping, the report said that if emissions from bunkers sold in Singapore were added to its national GHG emissions, the country’s per-capita emissions would quadruple to be six times the world average.

“While Singapore’s marine fuel sales exert a global environmental footprint, much of the pollution is concentrated in seas and coastal areas neighbouring the country,” said the report. Emissions are at their highest around Singapore and Southeast Asia, with further hotspots in the South China Sea, Indian Ocean and across Oceania. For Singapore and its neighbours, emissions from shipping have a tangible impact on premature deaths in coastal regions. “Countries like China, Malaysia, Indonesia, and Australia could win twice by producing and selling renewable marine fuels at their ports: first by reducing local air and water pollution and second by capturing the economic benefits of new renewable marine fuel markets,” said the report.

The incentive to develop bunkering infrastructure is further improved by the nature of future fuels for the maritime industry.  “As the preeminent seller of bunker fuel globally, Singapore will need to transition to low-carbon bunkering if it wants to remain an important bunkering port. Several steps should be considered. Singapore could halt further investment in fossil fuel bunkering infrastructure, for example by no longer registering new fossil fuel bunker barges.” said the study.

The report also suggested that Singapore advance green shipping corridors. “Relevant corridors may be along northward along coastal China and then extending to East Asia; westward to India, the Middle East, and then Europe; and throughout the ASEAN region to Australia. International agreements like the 2021 Clydebank Declaration could help structure that involvement.” 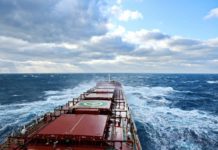