A tanker operating company’s decision to change masters without a handover period led to a $72.9 million marine accident, according to a National Transportation Safety Board Marine Accident Brief.

On October 17, 2020, at 0446 local time, the tanker with a crew of 21 was attempting to anchor in the Southwest Pass Fairway Anchorage in the Gulf of Mexico, about 21.5 miles from Pilottown, Louisiana, when it struck the manned oil and gas production platform SP-57B.

The platform’s four crewmembers and one technician evacuated to a nearby platform by helicopter after activating the emergency shutdown device to shut in wells to the SP-57B platform.

​In its report the NTSB says the company did not comply with its own safety management system (SMS).

The accident master boarded the underway vessel outbound to the anchorage, only seeing the departing master on the tanker’s deck.

The company placed the accident master into critical vessel evolutions, such as navigating downriver and anchoring at night, without any overlap with the departing master.

According to the report, the accident master told investigators he wanted to anchor the ship as soon as possible because he was tired.

The accident master traveled from Turkey to join the vessel and told investigators he had no sleep for over 50 hours while traveling.

Investigators determined the probable cause of the contact of tanker with the oil and gas production platform SP-57B was the tanker’s operating company not ensuring sufficient time for the master’s turnover, which resulted in the master’s acute fatigue and poor situation awareness during an attempted nighttime anchoring evolution.

Vessel operating companies should ensure that joining crewmembers/personnel are given the opportunity to obtain a sufficient handover period and adequate rest before taking over critical shipboard duties, such as navigation, that could impact the safety of the crew, property, and the environment. 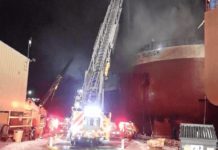 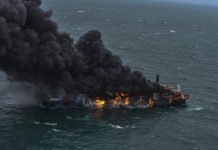