Port of Hueneme in California has initiated the Phase II of its Grid-Connected Shore Power System.  This system enables three ships to simultaneously access shore power at the port.  An official ribbon cutting ceremony was held at the port.

California had an at-berth shore power regulation since January 1, 2014, but failed to enforce it at the Port of Los Angeles in February.  After this came the Phase 1 of the shore power system in April 2014.  This has been used by “many ships” from companies such as Fresh Del Monte Produce Incorporated and Hamburg Süd.

Mike Villegas of the Ventura County Air Quality Control District says that, “By utilising grid electricity instead of the auxiliary engines on these vessels the port is not only reducing emissions of nitrogen oxides which form smog, but they are reducing emissions of diesel particulate matter and providing a public health benefit to their neighbours”.

The project “represents a giant leap forward for the Port and the community,” according to Port CEO and Director Kristin Decas.

“This project is a win for improving our environment, growing our local economy and increasing the competitiveness of the port in the international marketplace,” said Julia Brownley, a California representative in U.S. Congress. 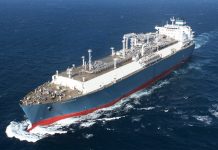