The Germans have the Wilhelm Gustloff, and the British have RMS Titanic. But while those started their lives as ocean liners, the most iconic American equivalent was just a humble lake freighter.

It may have had a modest job at face value, but the SS Edmund Fitgerald was no ordinary freshwater bulk freighter.

It was a colossal titan of America’s Great Lakes shipping and held just as much esteem in its field as the Titanic.

The fateful day it sank to the bottom of Lake Superior in a hellacious storm, it earned a folk legend status among American and Canadian sailors unlike any lost vessel in the history of North America.

Of all North America’s Great Lakes, Lake Superior, the one most often sailed by SS Edmund Fitzgerald, stands above all others. Estimates peg that it could hold the water mass from all four other Great Lakes with room to spare, and it’s the largest freshwater lake by surface area in the world.

At 350 miles wide and 160 miles long with depths well north of 1,000 feet, this proverbial ocean in the middle of a continent between two global superpowers is no place for pleasure yachts or jet skis.

Lake Superior’s waters can and have swallowed lesser ships whole without so much as a belch from its depths.

As many as 6,000 ships are known to have been lost, mostly cargo transport ships delivering supplies between urban centers along the lake’s shores in Wisconsin, Michigan, Minnesota, and the Canadian province of Ontario.

By lake bulk freighter standards, or by any maritime vessel really, SS Edmund Fitzgerald was a behemoth. 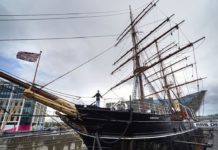 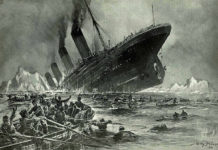 World’s Most Famous Shipwrecks In The History 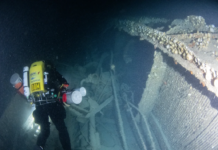