Thirteen countries have agreed to a new crew change pact following an international crew change summit convened by the UK, says an article published in Splash 247.

Thirteen countries that signed the pact

The following are the 13 countries that now recognise seafarers as key workers:

The UK’s transport secretary Grant Shapps said, “It is unacceptable that there remain thousands of people stranded at ports around the world and we owe it to them and their families to change things. Today marks a new chapter for seafarers and alongside our international partners we are taking, a stand to end the bureaucracy preventing men and women around the world from returning home.”

Globally there are now over 200,000 seafarers who are stranded at sea and have overrun their contracts with another 200,000 waiting to start employment and get paid by working at sea.

Secretary-general of the International Chamber of Shipping Guy Platten said, “This summit is a welcome show of political leadership at a time when seafarers across the world need it most. Governments must now use this summit as a catalyst to implement the solutions the shipping industry has provided, applying the political will needed to put them into practice. This issue doesn’t require money and did not need complicated negotiations. This summit is a catalyst for action.”

The International Maritime Organization has created a 12-step process for states to adopt to make crew changes safe and efficient.

Following the summit, the International Transport Workers’ Federation (ITF) immediately called on the world’s governments to act swiftly to give seafarers visa, border and quarantine exemptions in order to make crew changes possible and resolve the present crisis.

ITF general secretary Stephen Cotton said, “Governments today adopted a statement pledging to urgently take forward a range of actions to avert the global crisis that is unfolding at sea for the more than 200,000 seafarers who are trapped working on ships beyond their contracts, and desperately wanting to return home.”

“We thank those countries who came together today for their commitment, and now call on those ministers and officials who signed the dotted line need to head back to their countries and follow through on these critical pledges by bringing in practical exemptions and waivers that allow seafarers to move freely to enable safe crew changes and repatriation to their home countries.”

Cotton went on to call for action across the board.

Cotton said, “After months of this crew change crisis getting worse, governments must do their bit.”

“That means that port states where ships dock; flag states where ships are registered; transit hubs with airports; and the home countries of seafarers, all need to make visa, quarantine and border exceptions for seafarers now, not tomorrow, not next week.”

A.P. Moller-Maersk CEO Soren Skou said, “We strongly urge the relevant national governments to address the situation of these men and women and help us establish safe corridors between key countries to keep the situation from deteriorating further.”

Skou said failure to act fast could create a “humanitarian world crisis with potential consequences for safety at sea.” 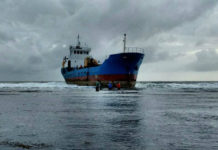