According to an article published by Tech Times, a recently discovered letter penned by Titanic steward Richard Geddes details the near-miss incident that happened days before the ship sank, and how it may have changed the course of history.

Just when the world thinks it knows everything about the Titanic, pieces of related artifacts keep coming up from time to time. The said letter was written days before the iceberg collision on April 14, 1912, and was addressed to Geddes’ wife, Sal.

What makes the newly found letter so important?

“First and foremost it was written onboard the Titanic, it has its envelope,” says auctioneer Andrew Aldridge. He adds that it contains official paperwork about Geddes, not to mention the actual content is exceptional as it describes how the Titanic almost collided with another ship days before the tragic iceberg collision.

The lot for auction also includes some pictures of Geddes and his wife, as well as his death certificate, which testifies that he died in the Titanic disaster.

What’s In A Letter The letter mainly describes how another vessel almost bumped into the Titanic, days before the world’s known tragedy.

Geddes started with a greeting, calling Sal “my dearest.” He explained how they got away the day before, after heaps of trouble.

He furthered that when they passed by ships New York and Oceanic, the former broke its ropes, and very closely ran into the Titanic. It just so happened that they were able to avoid the collision. He also wrote that he saw images of Belfast and that it must be a challenging time for the captain.

Geddes’ letter also manifested his faith in the Titanic, describing it as a “great deal better,” and “steadier” than other vessels.

“If we get in on time on Wednesday and there happens to be a boat I will write from New York,” he wrote.

Lastly, he signed it with great love and kisses to Sal and their kids. The letter was then sent to its recipient in Southampton, in a White Star Line envelope.

Geddes was among the more than 1,500 people who died in the Titanic tragedy. 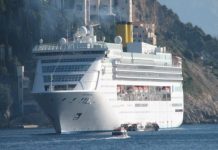