Bittersweet for owners as a positive result from the OPEC meeting a few weeks back promises a brighter future, but until that point, rates have remained under pressure.

The Suez canal blockage proved a ﬂash in the pan and with many Modern/approved Owners pointing to the Cape of Good Hope; Petrobras, Petrogal and the like received a high number of oﬀers for their Atlantic stems.

With rates dropping across the board, USG/East is down to $4.3m, and West Africa to test, but a cargo working now will be pushing mid-low ws30’s. AG/East likewise, with the astute Charterer, picking the right ship knocking on the w 30 level.

With the IMF raising 2021 global growth forecast to 6% (up from 5.5%), there remains optimism for the year ahead.

As we have said before, it’s a case of riding the trough, for the crest of the wave ahead.

The long Easter weekend in Europe gave some participants a much welcome break, but it came at a heavy price.

This i a momentum game and in a market that was already softening, a Meg/China cargo took full advantage of this lull and dragged this route down to W59.

With a ﬂeet of Eastern ballasters hellbent on West African loads, the prognosis in both hemispheres remains rather subdued this week.

Td20 will stay bogged down in the low W60’s whilst Td23 will struggle to stay out of teens territory.

On the upside, but possibly a little further down the line, economic ﬁgures emanating out of China and the USA suggest that those respective economies are riding out the pandemic much better than expected, which should help sentiment in the medium term.

The Nsea/Baltic market took an after Easter break with limited activity in the market.

Despite a relative short tonnage list, cargo activity doesn’t seem suﬃcient for rates to hold and Charterers will try and push for lower than last done.

Going forward we expect rates to move sideways with a slight downward pressure before we hit the 3rd decade April loading window where we expect more injection stems for the Urals program.

In the Med/Bsea we saw short lived excitement on the back of Suez Canal closing prior to the easter break.

However with the reopening of the canal in combination with little cargo activity, and ballasters coming into the area we have seen the market taking a solid downward correction.

We expect the market to remain soft in natural ﬁxing window.

The main driver for the index recently has been a couple pf strong front haul ﬁxtures in the mid 40,000s. The atlantic is expected to improve further as well as c3 activity will pick up.

Easter has for sure not changed the market’s trend. Post Easter we see the same market tendency in both hemispheres.

Negative sentiment with rates slipping on all trades. P1A currently yielding 17k and the Pac round pricing is slipping down to 22k.

It is still a ‘sit and wait’ situation among chrts and owners, but with Capes pulling up on all trades mid week – we do believe Pmax will follow shortly.

Supras remained under pressure with low ﬁxing activity. USG in forefront with tonnage building up and little fresh emerning. Fhauls were done at close to 27000 levels. Supras from USG to Cont discussing 15000 levels.

An Ultramax open north China was ﬁxed for a trip via NoPac to Singapore-Japan at $24,000. 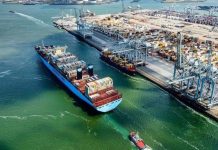