With the first week of Russia’s invasion of Ukraine showing no signs of a quick end to the fighting, the crew change situation is poised to escalate as reported by Splash 247.

With crew movement impossible out of Ukraine and becoming much harder logistically for Russians too, ship managers have started to ask their staff at sea to extend their current contracts to fill any immediate gaps.

Reports are also emerging of Russian and Ukrainian crews seeking asylum requests in greater numbers in the US.

At a webinar yesterday hosted by InterManager, the association for third-party managers, attendees discussed the potential “tinderbox” conditions for many at sea, watching the war from afar.

Henrik Jensen, who heads up Danica Crewing Specialists, which focuses on Eastern European seafarers, revealed there had already been one incident onboard involving a mixed Danica crew.

Natalie Shaw, director of employment affairs at the International Chamber of Shipping, warned: “The current goodwill among the crew to be friendly with each other is going to deteriorate drastically in the next few days without any question as people start to hear about their families being affected – that is when I think it is going to become much more fractious onboard.”

Columbia’s O’Neil stressed it was very important not to demonise Russian seafarers.

Issues with pay to Russian crew with many banks sanctioned were highlighted during the hour-long webinar.

Managers also discussed pooling cash to send money to families of Ukrainians ashore, especially for the families that have fled, leaving their seafaring men behind to fight.

International Maritime Organization secretary-general Kitack Lim repeated over the weekend his message to keep seafarers safe from the conflict. 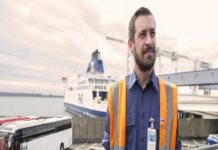