The biggest ship to dock in the UK has arrived in Southampton.

The 400m-long MOL Triumph is the first of a new type of ultra-large container vessel to enter service this year. Its operators claim it is more fuel efficient than previous carriers.

Built by Samsung in South Korea, the ship will run between Chinese and European ports. It can hold the equivalent of 20,170 containers.

Southampton port operator said it was a “significant and proud occasion”.

It is on its first trip to northern Europe since entering service earlier in 2017.

It arrived in Southampton at about 14:00 BST and will remain in the port until Sunday before heading to Hamburg and its return journey to Asia.

The even larger 20,568 TEU Munich Maersk is due to call at the port later this year. The size of a container ship is defined in terms of its load capacity.

Chris Lewis, managing director of Southampton port operators DP World, said: “It is an honour to be hosting one of the world’s largest container ships as it arrives in Northern Europe for the first time.”

It’s all about economy of scale. One huge engine, one single propeller, shifting vast amounts of cargo between Asia and Europe as efficiently as possible.

MOL Triumph has the latest tricks – like a special paint that reduces friction in the water. These ships use about a third less fuel per container than ships built only five years ago.

Environmental performance is a hot topic. Ships like this burn heavy oil which contains a lot of harmful sulphur. So this one has been designed to switch to liquefied natural gas if the economic case for the cleaner fuel stacks up in years to come.

A round trip between European and Asian ports takes about 90 days. All with just a handful of crew – there are only about 20 people on board. 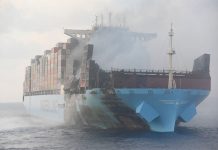