A complicated dance of humans, robots, and gigantic ships

London Gateway is a new port built to serve Britain’s capital city. By dredging a deep channel along forty miles of the Thames, operators have created a harbor able to take on the biggest container ships in the world, involving a massive container-handling operation with the latest (and biggest) in robot crane technology.

The first custom-built container ship, the Hawaiian Citizen, set sail in 1957, with a cargo of 356 new ‘intermodal’ containers. Container ships were carrying 5,000 containers apiece by the 1980s. These days a port like London Gateway is a land of metal giants. And robots. 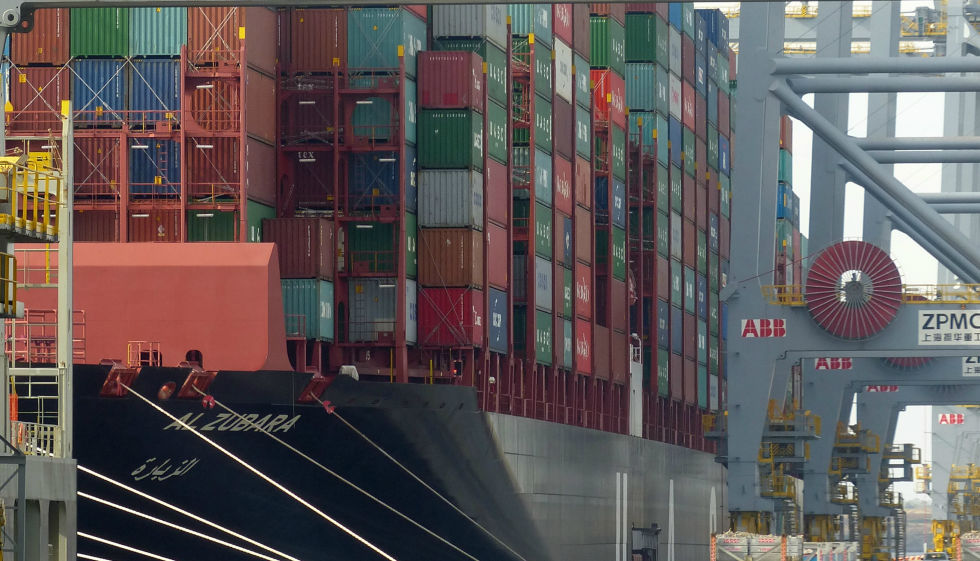 When the colossal Al Zubara docked at London gateway on September 23, she was believed to be the most laden container ship ever, a fact since confirmed by Matt Abbot, London Gateway’s communications officer.

At almost 200,000 deadweight tons, the 1,300-foot Al Zubara is about twice as heavy as a Nimitz-class aircraft carrier or six times as big as a World War II battleship.  That makes it the biggest container ship ever built—along with its five sister ships.  Each can carry a staggering 18,744 containers at full capacity.

As ships approach the port, they are met by tugs that rotate them to point downstream and nudge them sideways to berth at the quay.  Then the unloading process begins. 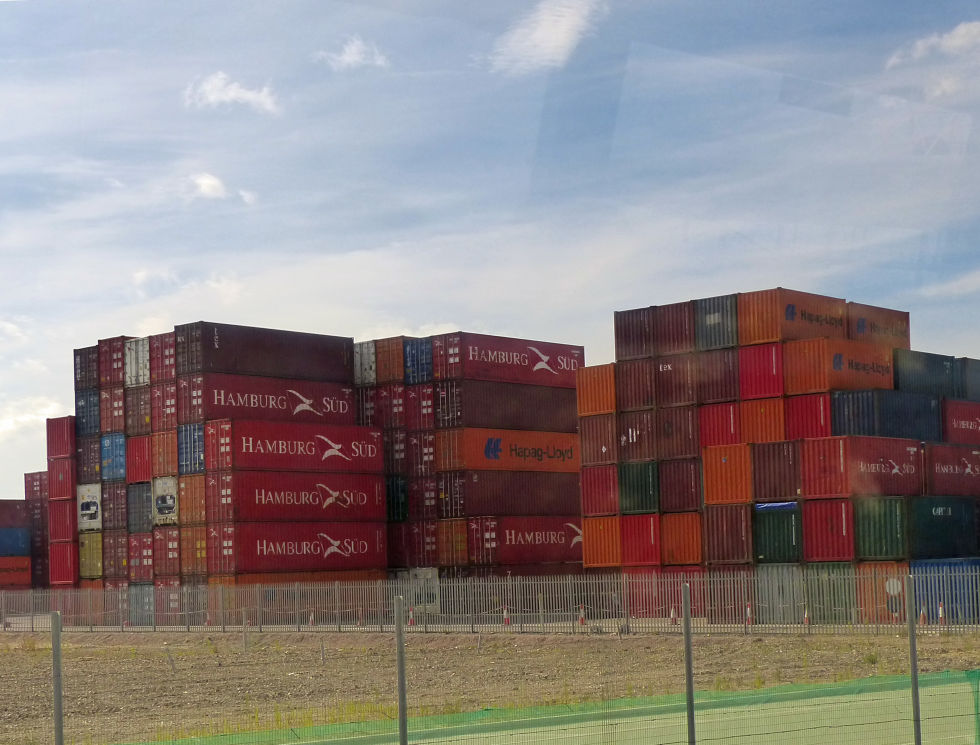 Every shipping container in the world has its own unique 20-digit identification number, known as a box number.  Although containers are always expressed in terms of “Twenty-Foot Equivalent Units” or TEU, the most common type of container is the 40-foot version, which is exactly the same size as two TEUs end-to end.

The standard container is a simple steel or aluminum metal box, but specialized containers include bulk liquid containers and refrigerated units or “reefers” used for fresh fruit or frozen produce with controls for atmosphere as well as temperature.  But many of the containers at the port at any given time are empties, waiting to be returned on the next ship. 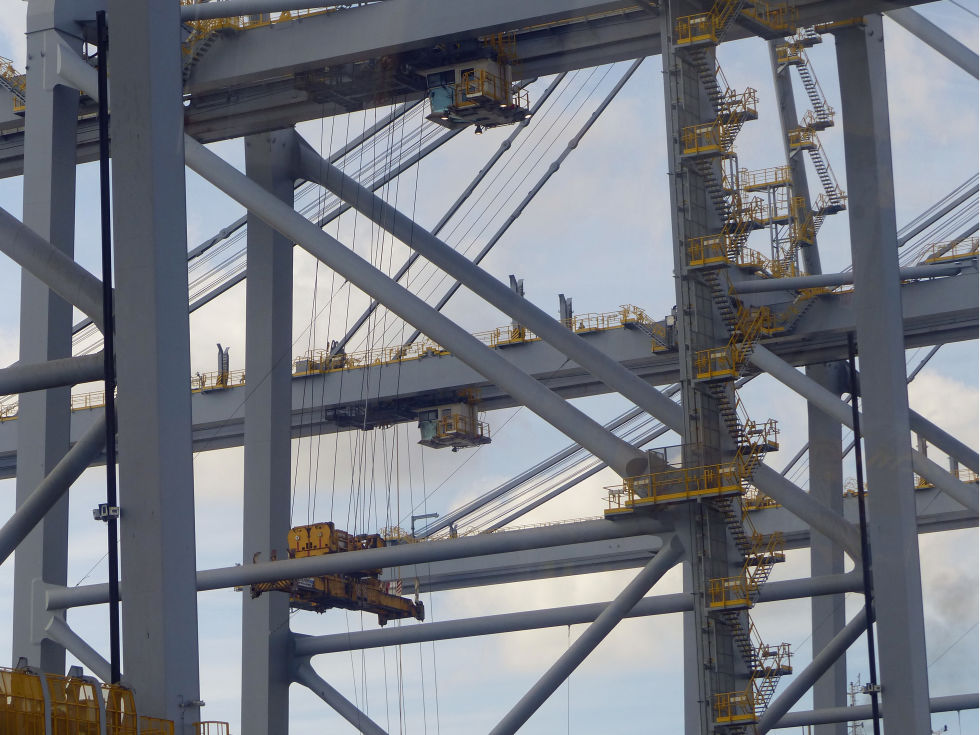 Containers are lifted off the ship two at a time by quay cranes, 450-foot-high behemoths with booms long enough to reach across the width of the ship .

The cranes at London Gateway are the largest in the world and were imported from China by the Zhen Hua, a special transport ship which carries assembled cranes in one gigantic piece. Each of the 2,000-ton cranes runs on rails supported by foundations driven 150 feet into the ground.  The operators sit in cabs high above.

When unloading these ships, it’s better to have good motor skills rather than brute strength. 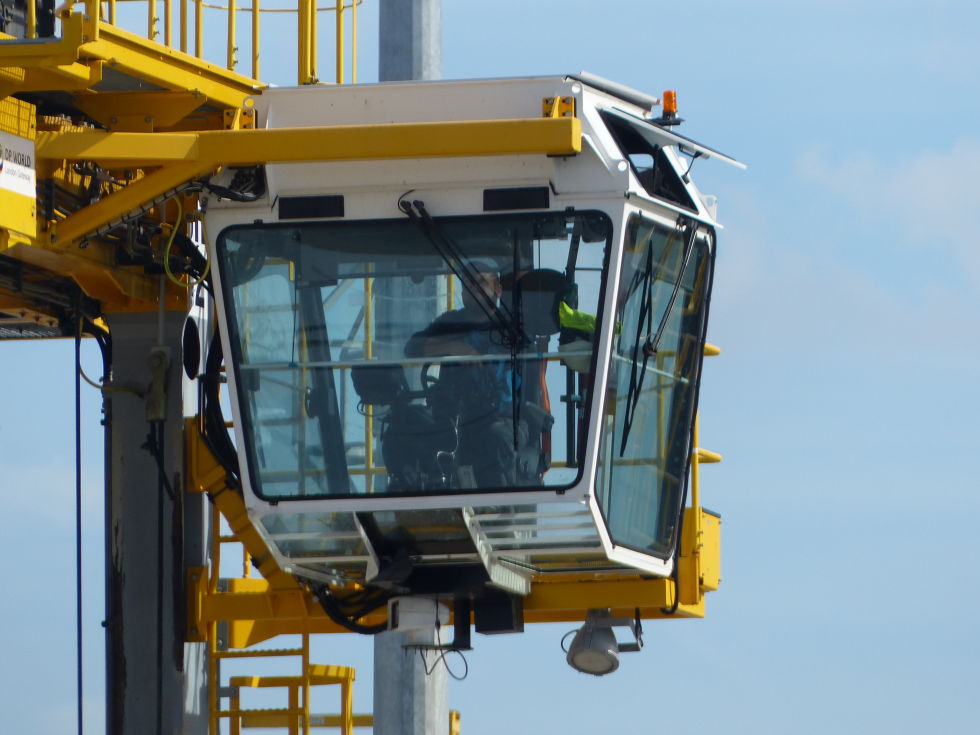 Once placed on the quay, the containers are picked up by a fleet of giraffe-like vehicles known as shuttle carriers (GIF above).  A shuttle carrier can pick up two TEUs at once, with a hydraulic lift to move and stack them.

The current loaders are hybrid diesel-electric vehicles with regenerative braking, a useful feature for machines constantly stopping and starting. 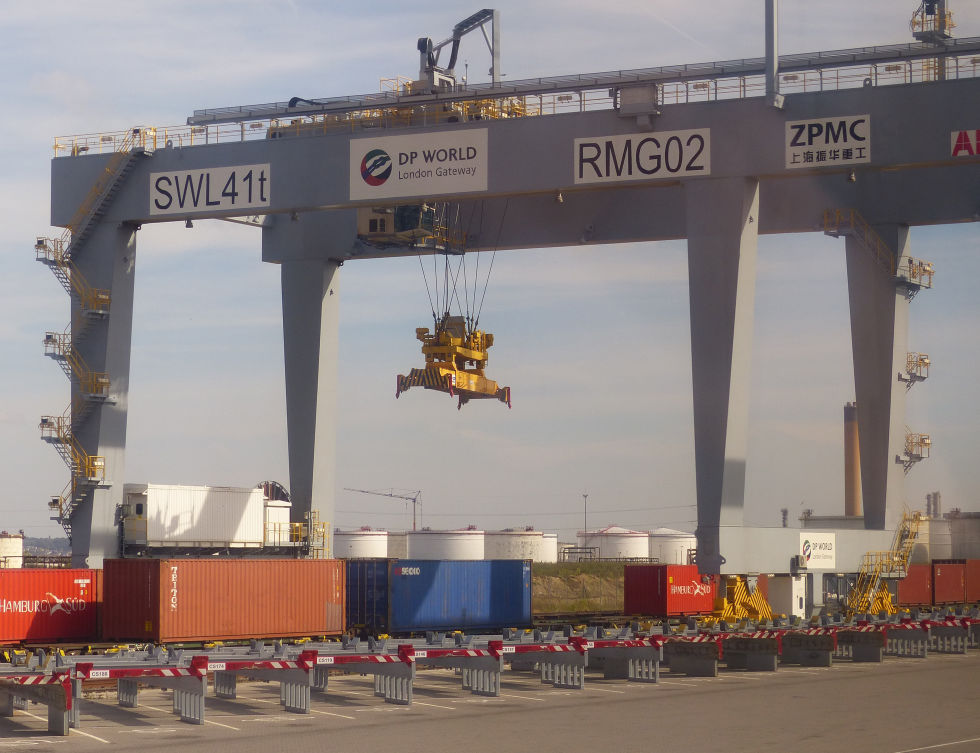 After the shuttle carriers have moved the containers, another machine takes over.  These automatic stacking cranes are robotic systems which pick up containers and, as its name suggests, stack them—no humans required.

Stacking cranes use a pair of 3D laser scanners to detect the exact position of a container.  A central database keeps track of the location of every container in the port and ensures that they are stacked for maximum efficiency. To leave the port for its next destination, the container is loaded on to a truck or railcar.  This process is also completely automated.  The driver parks in a specified bay, then steps away from the vehicle for safety reasons.  The stacking crane does the rest, automatically locating the correct container in the stack, picking it up, and bringing it over.

The stacking crane lines up the container with the truck bed and lowers it into place.  All the driver needs to do is secure the load before heading off.  Then, an optical character reader confirms the container’s box number on the way out.  The whole process takes about five minutes.

To see the whole operation at work, you can watch this timelapse video here

Once completely unloaded, this complicated dance of advanced machinery, global commerce, and human ingenuity begins anew as the Al Zubara preps for its next voyage.