The Trump administration moved on to accelerate vaccinations of Americans against COVID-19, releasing the rest of the doses it had been keeping in reserve and recommending states immediately open inoculations to those aged 65 and over, reports Reuters.

Federal and state health officials have scrambled in recent days to step up vaccination programs that had given shots to only 9.3 million Americans as coronavirus infections remain at record highs in many U.S. states nearly two weeks into the new year.

Many U.S. states had strict rules in place giving shots to healthcare workers and nursing home residents first, telling “non-essential workers” they might wait months for their turn.

“We’ve already distributed more vaccine than we have healthcare workers and people in nursing homes,” U.S. Health and Human Services Secretary Alex Azar told ABC News. “We’ve got to get to more channels of administration.”

Roughly 27.5 million doses have been distributed by the U.S. government to states so far, according to the U.S. Centers for Disease Control and Prevention.

Azar said the outgoing administration, which had been keeping doses in reserve to make sure that all those who got a first inoculation receive their second shot on schedule, was now confident enough in the supply chain to release that stockpile.

Last week, a spokesman for Joe Biden said the president-elect, who takes office on January 20, would release more of the reserved doses. The pace of vaccinations has risen to 700,000 a day nationwide and was expected to hit 1 million a day within 10 days, officials said.

“Michigan and states across the country remain ready to get more shots in arms, which is why the Trump Administration’s decision to grant our request and release millions of doses of the vaccine is so crucial,” Michigan Governor Gretchen Whitmer said in a statement.

Whitmer, who had backed the lower vaccination age, is seeking permission from the U.S. government to purchase 100,000 vaccine doses directly from manufacturer Pfizer Inc.

The U.S. Food and Drug Administration has authorized the vaccine from Pfizer and partner BioNTech SE and a second vaccine from Moderna Inc for emergency use.

A Reuters tally has shown that the number of COVID-19 patients requiring hospitalization may have leveled off, at least temporarily, although public health officials warn that further spread may still be seen from holiday gatherings.

The number of new COVID hospitalizations statewide has fallen to about 2,500 admissions a day over the past two days from a daily average of about 3,500 admissions in previous days. Ghaly called that “the biggest signal to me that things are beginning to flatten and potentially improve.”

Patient overload due to the new strain

Despite the encouraging statistics, staff at Providence St. Mary Medical Center in Apple Valley, California, said that the situation was grim.

“Where in the beginning we were overloaded with a lot of patients – we still have a lot of patients – but now it seems like they’re sicker than they’ve ever been before,” said Mary Mendy, executive director of acute care services at the hospital some 90 miles northeast of Los Angeles.

“And every day there’s Code Blues on the floor and more and more patients are updated to ICU. It’s devastating,” Mendy said.

The latest surge has potentially been compounded by a more infectious variant of the virus first seen in the UK and now found in at least 10 U.S. states – California, Florida, New York, Colorado, Georgia, Indiana, Connecticut, Minnesota, Pennsylvania and Texas. 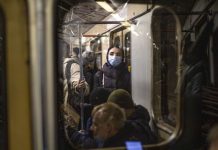 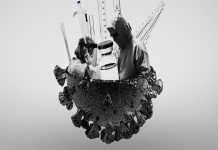 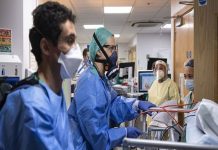