The siltree System developed by Value Maritime is a prefabricated gas cleaning system that filters sulphur and 99% of the particular matter. LR has granted Approval of Principle for Value Maritime’s Carbon Capture & Storage. Two Eastern Pacific Shipping MR Tankers will be fitted on the Filtree System which will reduce greenhouse emissions.

The CCS system uses a Carbon Capture Module that captures CO2 in a unique chemical. This chemical stored in a large tank will be converted and when full, will be pumped out in port. The CO2 will be released for reuse by customers or for carbon sequestration networks.

Value Maritime’s CCS technology has the potential of exceeding 90% in the future and allows vessels to capture up to 40% of CO2 emissions.

LR’s AiP confirms Maritime Value as compliant with LR’s goal-based and extensively prescribed prerequisites, which is a first step on the journey towards halving GHG emissions by 2050.

According to the Chief Operating Officer, Lloyd’s Register, Mark Darley, “LR are delighted to award Approval in Principle to Value Maritime for their Carbon Capture and Storage system. With installation on the Pacific Cobalt and Pacific Gold making them the largest ocean-going vessels to be fitted with CCS technology, EPS are taking tangible steps to reduce CO2 emissions in the shipping industry.”

Maarten Lodewijks, Co-Founder & Director, of Value Maritime, said that LR’s Approval in Principle for the Carbon Capture and Storage System can obtain filtering and carbon capture technology for the tanker market.

Mirtcho Spassov, Manager, Green Shipping, Eastern Pacific Shipping, said, “Carbon capture has the potential to play an important role in reducing the industry’s carbon emissions, complementing our efforts to adopt alternative fuels and to increase the efficiency of our fleet.” 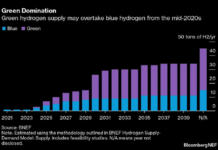