The Baltic Exchange’s main sea freight index, tracking rates for ships carrying dry bulk commodities, fell to its lowest in more than two months on Tuesday amid a fall in rates across segments, says an article published in Reuters.

Dip in the vessel segment

* The overall index, factoring rates for capesize, panamax, and supramax shipping vessels, fell 91 points, or almost 4%, to 2,204 points, its lowest since April 20.

* While the dry bulk sector has benefited from increased coal flows, amid power shortages in Europe and Asia, faltering steel demand from China and slowing global growth could “keep iron ore and metallurgical coal trade flows at a slumbering pace,” George Lazaridis, research head for Allied Shipbroking wrote in a weekly note.

* Meanwhile, iron ore climbed to a one-week high, as China eased some quarantine requirements for international arrivals which sparked a broad-based rally in metals.

* But a sustainable rally for China’s ferrous complex remains uncertain as Beijing is ruling out flood-like stimulus. Its resolve to limit steel output this year at below 2021 production to curb emissions could also hurt demand.

* Peter Sand, analyst for logistics data firm Xeneta, wrote in a note that global spending on shipping could hit a record high this year, as congestion and delays continue to plague shippers on several major trades. 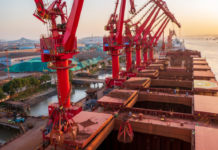