According to an article published in CNN, Wendy Williams is set to make history as the first Canadian female captain of a major cruise ship when she takes the helm of Virgin Voyages’ newest ship.

On June 18, the cruise line announced that Williams will be the master of Scarlet Lady, set to sail next spring. Fewer than 3 percent of the world’s mariners are women, according to the cruise line, and Williams hopes to lead the way for others.

“I think we’re making amazing strides now,” Williams said in a press release. “When you walk onto the bridge you don’t have a gender. You’re a Mariner. You’re an officer, this is what you do. This is what we do together.”

“There should be no bearing on what our gender is. And that’s the kind of bridge that we are going to have. There’s no space in our day to have a gender bias.”

The company announced last year that it plans to bridge the gender gap in leadership roles. Along with Williams, almost a dozen female officers and engineers have been recruited to join Virgin Voyages, including Jill Anderson as hotel director, Christin Wenge as safety officer, and Lindsay Kerber as an environmental officer.

Williams was born in Sept-Iles, Quebec, and lives in Vancouver Island, British Columbia. She has more than 28 years of experience working on ships and started her career on a commercial fishing boat. Over the years, she moved her way up the ranks from deckhand to ferryboat captain to working on the bridge of other cruise ships.

“Captain Wendy’s extensive maritime background makes her an excellent choice to lead the Scarlet Lady, but it is her spirit and drive to approach life at sea differently that make her the perfect fit to join the Virgin Voyages family,” said Tom McAlpin, president and chief executive officer for Virgin Voyages, in a press release.

Virgin Voyages’ first ship, the adults-only Scarlet Lady, will depart Miami for the Caribbean in 2020. The Richard Branson-backed cruise line touts new designs and experiences on board to sway travelers who might not normally consider cruising. Williams says working for the new line is a “dream come true.”

“I have salt water in my veins and nothing brings me more joy than being at sea,” said Williams.

The ship has more than 20 eateries and a tattoo and body piercing parlor, dubbed Squid Ink, and it features a two-story bar, inspired by Branson’s first recording studio. 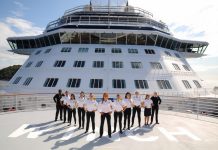 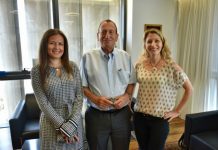 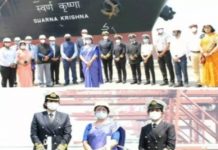