The New Zealand Transport Accident Investigation Commission has released its statement on the grounding of the Leda Maersk citing reliance on visual navigation as a factor in the incident, reports Maritime Executive.

On June 10, 2018, the Danish-registered container ship arrived off the Port of Otago, embarked a harbor pilot and proceeded up the Lower Harbor channel at about 1800, during the hours of darkness.

The master, officer of the watch and helmsman were on the bridge, with the harbor pilot directing the course and speed of the ship.

The ship was rounding the final bend in the channel before reaching its berth, when a combination of factors caused her to deviate from the planned track in the center of the channel and ground on the left channel bank.

Nobody was injured, and damage to the ship was confined to scraping of the paintwork on the hull.

The Commission found that the standard of bridge resource management on the bridge of the Leda Maersk fell short of industry good practice and that the Leda Maersk bridge team were not fully following the company policies and procedures for navigating in pilotage waters.

The Commission also found that, at the time of the grounding, Port Otago’s policies, procedures and compliance monitoring of pilotage operations fell short of meeting good industry standards outlined in maritime rules and the New Zealand Port and Harbour Marine Safety Code.

Recommendations by the Committee

The Commission recommended that the Chief Executive of Maersk Line A/S review the implementation of the company’s safety management system across its fleet with respect to navigation and pilotage and take the necessary steps to ensure a high standard is achieved by all crews on all its ships.

The Commission also recommended that the Chief Executive of Port Otago continue to take the necessary action to ensure its pilotage operations meet good industry practice and the guidance provided in the New Zealand Port and Harbour Marine Safety Code.

The Commission highlights some key lessons: 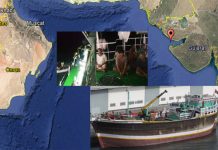 Mfame Team - October 23, 2015
0
https://www.youtube.com/watch?v=fW0_MmEO7o4&feature=youtu.be Watch the video of a cargo ship getting split into two as the high seas pound the vessel in a storm off Tauranga coast.  The cargo...
Powered by Pojo Software Pvt.Ltd
This website uses cookies to improve your experience. We'll assume you're ok with this, but you can opt-out if you wish.Accept Read More
Privacy & Cookies Policy
Necessary Always Enabled