Iron ore is getting beaten back down in a told-you-so rout after a procession of analysts, Australia’s central bank and miners themselves delivered warnings that gains were unsustainable, with the latest blow landed by the world’s top shipper saying prices are set to revisit the $50s.

Ore with 62 percent content in Qingdao fell 6.8 percent to $75.45 a dry ton, entering a bear market after declining more than 20 percent from a Feb. 21 peak, according to Metal Bulletin Ltd. The price has now erased all of this year’s gains, declining 3.1 percent. Earlier in Asia, futures in Dalian plunged 6.2 percent to the lowest close in five months as steel sank.

Iron ore is in retreat after hitting the highest level since 2014 in February amid concern that rising supplies from mines in Brazil, Australia and possibly China will again exceed demand, with warnings from Barclays Plc. and BHP Billiton Ltd. flagging losses. There’s also concern that additional curbs in China may hurt consumption, even as manufacturing picks up. On Friday, Australia’s government forecast in a quarterly report that a pullback is likely.

“There’s an expectation that tighter credit conditions in China will lead to some downturn in property construction in the second half,” said Ric Spooner, chief market analyst at CMC Markets in Sydney. “At the same time, both seaborne and domestic Chinese iron ore supply looks likely to increase. With Chinese port inventories remaining high, traders are seeing downside risk.”

Ore may slump to $55 a metric ton in the final quarter of 2017, with the average for the full year seen at $65.20, Australia’s Department of Industry, Innovation, and Science estimated in the report on Friday. Next year, it will average of $51.60, the department said, with forecasts referring to prices free-on-board from the world’s largest exporter.

“Growing supply, primarily from Australia and Brazil, is expected to steadily outpaced demand growth over the rest of 2017. As a result, the price is projected to decline,” the department said. Current price levels are unlikely to be sustained beyond the short term, it said.

That’s just the latest in a string of warnings. In February, Reserve Bank of Australia Governor Philip Lowe said that commodity prices were going to come back off again, highlighting in remarks to lawmakers that: “We shouldn’t start to think that the iron ore price is going to stay around $90.”

Capital Economics Ltd. said in March that there are some doubts about China’s demand, and predicted a retreat to $45 by year-end. Barclays Plc. and Citigroup Inc. are also among skeptics, while a string of executives from BHP Billiton, the world’s largest miner, and have also said there’s scope for a pullback.

China’s steelmakers suffered a fresh setback this week as the European Union hit producers with five-year tariffs on hot-rolled coil after an anti-dumping investigation. The tariffs could accelerate cutbacks in local production and are another potential headwind for iron ore, according to Spooner.

The report from Australia predicted a rising tide of exports from the biggest producers. Australian shipments will rise 8.3 percent to 876 million tons this year, and 902 million tons next year, the department projected, while Brazil will ship greater volumes every year to 2022. Brazil’s top producer, Vale SA, is now ramping up its newest project, S11D. Shares fell 2.2 percent on Thursday.

The department also highlighted the risk posed by the potential restart of mines in China, while noting that more stringent environmental curbs may limit local supplies. It flagged unprecedented stockpiles held at China’s ports, warning these “will eventually place downward pressure on the price.”

The recent “spike is attributed to a combination of unexpectedly robust demand from China’s steel mills, temporary supply disruptions and slower-than-anticipated growth in global iron ore supply,” the department said. “As supply grows and steel production moderates, the price of Australia’s largest exports, iron ore, and metallurgical coal are forecast to decline.” 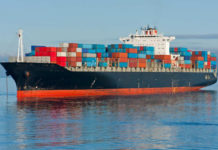