Over the past 10 years, a small number of companies have developed small-scale nuclear reactors with output comparable to large commercial ships.

While nuclear fuel is costly, the group supported by Gates has focused on developing a nuclear reactor capable of using spent nuclear fuel rods as the main energy source.

The development of thermal storage technology enhances the operation and cost-effectiveness of nuclear power stations. During off-peak periods and during rare emergency shut-downs, a large portion of heat produced by a nuclear reactor may be transferred into heat-of-fusion thermal storage at constant temperature.

There may be scope to develop thermal storage technology for mobile operation aboard a vessel and to source thermal energy from a large shore or offshore-based stationary large-scale thermal storage installation built adjacent to a nuclear power station.

Onboard heat-of-fusion technology that produces steam to drive an engine can offer ships a few hundred miles of operational range. The technology could be installed into a tug that would push and navigate a barge.

Alternatively, the heat-of-fusion vessel could be a power generator to be towed by a large ship to which it provides electrical power to activate ship-mounted electric motors that drive propellers (azipods).

The towed vessel could also include a small nuclear generator that would provide propulsive electric power to the main ship and offer trans-ocean sailing range.

While a stationary nuclear power station would provide recharge energy to a large-scale stationary thermal storage installation, there would likely be scope to modify the technology to include thermal recharging from mobile nuclear reactors installed in a towed vessel that provides propulsive electrical power to a large ship.

Onboard stored battery electric power could provide short-distance low-speed sailing to the large ship, with the option of the ship towing a local battery-electric or thermal-electric vessel able to provide propulsive electric power to the ship’s propellers. Such ships would sail between ports that have nearby coastal thermal storage technology.

Access to thermal storage technology would enhance the economics of nuclear fission and radiation-free fusion technologies, as well as mobile nuclear technologies that include the 60MW NuScale reactor, the 25MW Hyperion reactor and 10MW Toshiba reactor that could all be adapted to civilian commercial maritime propulsion.

Research is underway involving thorium based reactor technology with potential to reprocess thorium for repeated use to maintain reactor thermal energy production.

Coastal short-sea shipping is cost-competitive in terms of moving bulk cargo and includes both domestic shipping and international ship transportation.

Most short-sea shipping operations involving thermal energy storage would combine a large tug pushing and navigating a large barge. International trans-oceanic shipping involving the operation of a nuclear reactor would be restricted to routes where navies could assure ships security from piracy.

Several companies internationally are involved in the research and development of small-scale nuclear power capable of providing propulsive power to a single ship or a small convoy of ships.

The development of thermal energy storage technology that is compatible to nuclear power enhances the long-term operation and long-term cost competitiveness of small –scale nuclear power. 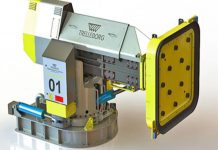 mfame editor - November 8, 2019
0
﻿﻿﻿﻿﻿﻿﻿﻿﻿﻿﻿﻿﻿﻿ Spinnaker Global chairman Phil Parry discusses his ’obsession’ with leadership impacts ahead of a panel on the subject at Tanker Shipping & Trade’s Conference...
Powered by Pojo Software Pvt.Ltd
This website uses cookies to improve your experience. We'll assume you're ok with this, but you can opt-out if you wish.Accept Read More
Privacy & Cookies Policy
Necessary Always Enabled