Are you a fan of Star Wars? Then you’ll definitely like the U.S. Navy‘s Phalanx CIWS.  They’ve been nicknamed R2-D2 because of their distinctive barrel-shaped radome and their automated nature of operation.

If you like Star Wars then you can appreciate the Phalanx CIWS.  Nicknamed the “R2-D2,” because of their distinctive barrel-shaped radome and their automated nature of operation, this close-in weapon system for defense against anti-ship missiles is something to behold not just for its looks.

Consisting of a radar-guided 20 mm Gatling gun mounted on a swiveling base, the Phalanx shoots off 4,500 rounds per minute! Cue gun noises with your mouth.

R2-D2, excuse me, the Phalanx has been used by multiple navies around the world, including our own United States Navy on every class of surface combat ship and also by the United States Coast Guard.

An entirely self-contained unit, the mounting houses the gun, an automated fire-control system and all other major components, enabling it to automatically search for, detect, track, engage, and confirm kills using its computer-controlled radar system.  Due to this self-contained nature, Phalanx is ideal for support ships, which lack integrated targeting systems and generally have limited sensors. 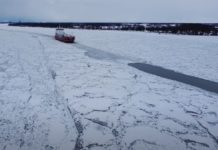 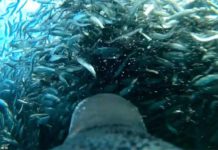