U.S. Coast Guard air and surface rescue crews at Sector San Juan responded and assisted the distressed M/V Island Express on the afternoon of July 29, reads a news release by the USCG.

The ship started taking on water shortly after departing the Port of San Juan, trying to avoid deteriorating weather conditions ahead of an approaching tropical disturbance. That disturbance became Tropical Storm Isaias early this morning.

Hours after the U.S. Coast Guard raised the alert level for mariners and ports in the U.S. Virgin Islands and Puerto Rico, due to the expectation that gale force winds from an approaching storm, the Coast Guard was responding to a distress call from a ro-ro cargo ship that was reportedly taking on water.

As of noon on Wednesday, July 29, the Coast Guard raised the alert level to Condition Zulu expecting winds greater than 39 mph from the passing storm. Ports it said would remain closed while cargo operations were suspended including bunkering and lightering.

The Island Express, a Cyprus flagged 412-foot ro-ro cargo ship, with a crew of 18 departed the port of San Juan to avoid the storm, but shortly after the vessel left the port, the Coast Guard reports that it received a mayday VHF radio transmission on Channel 16 from the captain of the Island Express.

They reported that there was a possible broken pipe in the engine room and that the bilges were approximately 75 percent full of water.

He added, “The teamwork and training of Station operators allowed these evolutions to safely take place simultaneously which led to all three assets arriving on scene with the distressed vessel within 45 minutes. The sea conditions on scene were pushing the parameters of the small boats but the crews endured and the distressed vessel was escorted safety into the harbor.”

Coast Guard to the rescue

This included two 33-foot small boats and a 45-foot Response Boat Medium from Station San Juan that got underway and arrived on scene with the Island Express.

A Coast Guard MH-65 Dolphin helicopter also arrived on the scene, and the aircrew was able to maintain communications with the Coast Guard boat crews as they escorted the cargo ship in eight to 10-foot seas.

In addition, the Sector San Juan Prevention personnel coordinated with the San Juan Bay Pilots and two Puerto Rico towing tugboats that rendezvoused with the Island Express at the entrance of San Juan Harbor.

The tugboats escorted the vessel to Pier 15, where the ship safely moored and the crew was able to finalize dewatering of the bilge spaces.

The Coast Guard reports that the vessel remains safely moored in the harbor. After the storm has cleared the area, Coast Guard port assessment teams will determine the condition of port facilities and navigable waterways.

Once a satisfactory assessment of the waterway, including critical aids to navigation, is completed, the Coast Guard reports that the captain of the Port San Juan will reopen the port for vessel traffic and resume normal operations. 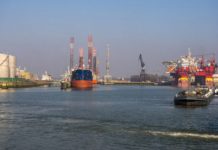 Yet Another Country Says “No” To Open Loop Scrubbers 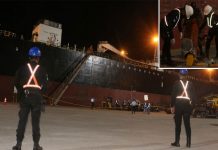 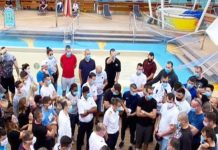 Mfame Team - June 22, 2016
0
Bulker Aground in Lake Superior Russia's new Project 22220 nuclear-powered icebreaker dubbed "Arktika" was launched from the Baltic Shipyard in Russia's second-largest city of...
Powered by Pojo Software Pvt.Ltd
This website uses cookies to improve your experience. We'll assume you're ok with this, but you can opt-out if you wish.Accept Read More
Privacy & Cookies Policy
Necessary Always Enabled