SMIT Salvage was awarded the contract for the removal of two very old wrecks in the Dutch section of the North Sea by Rijkswaterstaat, which is part of the Dutch Ministry of Infrastructure and Environment.

The removal operation was carried out with the sheerlegs ‘Taklift 7’ and ‘SMIT Barge 7’, plus two support tugs. For the removal of the first wreck one of SMIT’s large salvage grabs was used to pick up the wreck pieces and debris from the IJgeul, one of the channels into the port of Rotterdam. Wreck pieces were lifted on a barge. SMIT Salvage removed the wreck and debris to the required depth.

The second wreck, the sunken fishing trawler ‘Jan Breydel’, was raised in its entirety and placed on the barge. All the wreck pieces and debris were delivered and disposed of at a certified scrapping facility in the Port of Rotterdam. 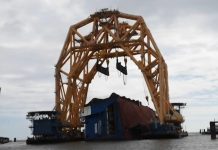