The market for diesel engine exhaust gas scrubbers has changed significantly since the first units were fitted more than two decades ago. In a recent Riviera Maritime Media webinar, Why scrubbers matter in shipping’s decarbonisation drive, Headway strategy and development team senior project manager Sharon Li explained the company has developed a natural gas system and a carbon capture system.

On diesel engine exhaust gas scrubber systems, Ms Li noted that the introduction of ultra-low sulphur fuel had the unintended impact of increasing the rate of wear in some engines. The fitment of a scrubber in the exhaust gas system and continued use of high-sulphur fuel can mitigate this effect.

One of the key features of the Headway-produced OceanGuard scrubber system is the ultra-micro atomisation, instead of applying layers of packing, which reduces back pressure and increases the contact area within the scrubber.

Although the scrubber systems are custom designed for a particular vessel’s exhaust gas and thermal profile, Headway has been able to design, supply and fit within a four-month window.

Carbon capture and carbon credits offer new challenges and opportunities for shipowners, as PureteQ CEO, Anders Skibdal, explained. He noted that as shipping tackles decarbonisation, there are two potential pathways. “One is either to consume fossil fuels, but utilising technologies to abate the emissions including carbon capture,” he said.

“The second way could be to produce sufficient green or clean energy,” he said, noting that the challenge here is that production is limited by the availability of green and clean energy.

To this end, PureteQ has developed a combined carbon capture and energy storage system. This system is a different design to the seawater-based scrubber. Instead, a chemical is sprayed into the flue tower which absorbs 83% of the CO2. The CO2-loaded solution is circulated through an electrolytic cell, which breaks down the solution into hydrogen, oxygen and CO2.

The chemical is restored in the process and recirculated back into the exhaust tower and the process recommences. “All the electricity for this process has to come from either clean energy, atomic nuclear power, windmills, or solar,” said Mr Skibdal. A key feature is the storage of energy in the form of hydrogen.

“The hydrogen that we produce out of this plant is exceptionally pure – it’s 99.7% clean,” he said, “which means it can be combusted directly or used to make new clean fuels.”

There is a balance to be found however between capturing carbon and producing hydrogen. If the price of electricity is low, then produce hydrogen; if the cost of electricity is high, then capture carbon. The development into large-scale plants will depend on a number of factors including, but not limited to, the price of carbon credits and the role of black carbon in the assessment of environmental technologies.

EGCSA executive director Don Gregory noted that black carbon had not been given enough prominence in the development of environmental technologies. “Whereas CO2 effects climate change as a greenhouse gas for hundreds of years, black carbon is very short lived, typically a few days or possibly weeks,” he said. Whereas CO2 is globally concentrated, black carbon is generally not transported long distances,” he added.

The creation of black carbon has been overlooked in the drive to find and develop alternative fuels, which all tend to share a common characteristic. “All combustion creates pollutants,” said Mr Gregory. “As it is likely that the marine diesel engine will remain the predominant prime mover on ships, technology to deal with combustion, pollution and pollution in exhaust gases will be essential.”

Is it possible to eliminate black carbon? Non-carbon combustion is possible, by using ammonia or hydrogen, but these fuels have their own issues. “Ammonia does produce other toxic pollutants,” said Mr Gregory, adding, “Hydrogen [has] a significant supply and storage challenge, as well as [low] energy density.”

He noted: “If black carbon cannot be eliminated, pre- or during combustion, then the only solution is post-combustion treatment. Simply remove pollutants before they reached the atmosphere.”

One solution being tested is electrostatic charging in the scrubber, and this has produced higher efficiencies than for standard scrubbers.

Sharon Li (Headway): “Decarbonising the marine industry will demand a wide range of new technologies. The only way to achieve this is to explore possibilities together across the industry.”

Anders Skibdal (PureteQ): “Energy efficiency is key. PureteQ services all the currently available scrubbers and it is interesting that only three systems monitor power consumption – that has to change.”

Don Gregory (EGCSA): “In every other industry, pollutants are dealt with at the exhaust phase, be it power generation, manufacturing or automotive. Only shipping has taken the direction of tackling pollutants at the input (fuel) stage – that might have been a mistake.” 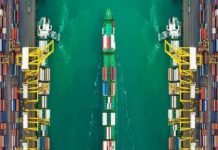 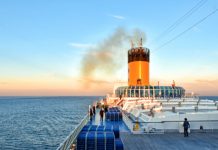