A Turkish woman has initiated an effort to bring about a revolutionary change in the maritime profession paving the way to redefine the term “seaman” says an article on Hurriyet.

To remove the sexist adjective

Mehtap Karatepe, a 38-year-old woman who is a crew member of a ship that has been sailing in international waters for about 14 months despite the adverse weather conditions, filed an application to the Communications Center of the Presidency (CİMER) because “seaman” was written on her sailor’s passport.

Forced to marry at the tender age of 14 and continued her life as a single mother of two at the age of 16, a Turkish woman has initiated an effort to bring about a revolutionary change in the maritime profession she started, paving the way to redefine the term “seaman” (game adamı in Turkish) as “sea person.”

If Karatepe’s application is accepted, a term covering only male personnel in the maritime profession will lose its sexist adjective.

Enrolling in a maritime course while not giving a rap about the sexist discourse of those around her, Karatepe started working on a cargo ship after receiving her certificate last year. However, the fact that Karatepe was described as a “seaman” on her sailor’s passport took away all the excitement she had of being a sailor.

After facing silly questions about her being tagged as “seaman” on her passport while sailing to the European countries, Karatepe decided to act on it. Tired of the questions projecting as if Turks don’t employ women on board, Karatepe eventually applied to CİMER.

Despite thinking that her effort will be in vain as she might not get any answer to her application, Karatepe was on cloud nine when she received a response from the Transport and Infrastructure Ministry.

“Changing the term ‘seaman’ to ‘sea person’ is among the plans of our administration,” it said in the reply given to Karatepe. The sailor is now waiting for the ministry’s plan to be put into practice.

However, this victory is nothing compared to Karatepe’s difficult life story. She was forced into marriage when she was just 14. She has two children, one 21 years old and the other 19, from her marriage, which lasted only two years.

Being a single mother, she spent her life working to keep her children at school and make them professional adults so that they do not end up with the same fate as hers. Working in the tourism and health sectors and even spending some time on marble workshops for a while, Karatepe finally achieved her childhood dream with the certificate she obtained.

Karatepe’s next goal is to gain the title of a master sailor first and then to become a long-distance captain by completing her university education. 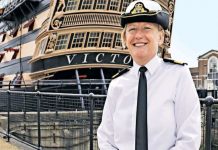 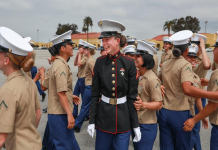 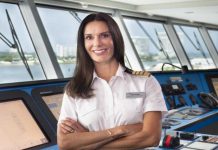