I went deep into the bowels of the world’s largest cruise ship to get a behind-the-scenes look at how it makes 30,000 meals a day, writes Sophie-Claire Hoeller for an article published in Insider.

The true scale of the world’s largest cruise ship is hard to fathom. On busy weeks, it can hold almost 9,000 people — guests and crew — who need to be fed multiple times a day.

How is it in Royal Caribbean’s Symphony of the Seas?

Royal Caribbean’s Symphony of the Seas is home to 23 dining venues, which together produce around 30,000 dishes every single day, spanning breakfast, lunch, and dinner.

We got a behind-the-scenes look at how this gets done every day, from food getting loaded onto the ship to hitting passenger’s plates.

According to the ship’s inventory manager Jaret de Silva, thirty tons of food are delivered in Miami every Saturday, ahead of a seven-day cruise on Royal Caribbean’s Symphony of the Seas. “On average, we load every Saturday 500 pallets and we need to finish by 4 p.m. in time to sail away from Miami,” he told Insider. “It’s a big logistic requirement.” Usually, around two extra days of food is loaded onto the ship in case of an emergency, which is upped to three days during hurricane season.

“It’s a hectic process,” he puts it mildly, explaining that food needs to be strictly temperature controlled, and cannot sit outside for more than five to seven minutes. All the food is inspected ahead of loading, and if it doesn’t meet his standards it won’t even be allowed on the ship.

Once onboard, a team of 18 people make sure food is divided into the appropriate store rooms. There are 20 store rooms, ranging in temperature from freezers to dry storage. There are fridges for seafood, meat, vegetables, and fruit.

All this happens on a super long corridor deep inside the ship that passengers don’t have access to.

Once chefs place their orders, food is prepped. Fish is scaled, cut, and thawed. Meat is sliced, ground, and weighed. Veggies are chopped.

Orders are then placed in special rooms where chefs can pick them up.

Boxes are neatly labeled with the date, and their contents and destination. They later make their way to one of the 23 different dining venues on board.

Orders must be placed at least a day in advance, and preparation starts the day before.

The bakery makes 40 different kinds of bread from scratch. And the pastry kitchen makes 100 different types of desserts, from cake pops to strawberry mousse.

Eight chefs work the day shift and another eight work the night shift just prepping dishes. Food is being prepared 24/7.

In total, the ship has 285 working chefs. There are four chefs making nothing but sauces, and another six entirely focused on soups. Sixteen of them chop vegetables.

From chefs to dishwashers and waiters, a team of 1,850 people keeps passengers fed.

The main dining room has a different menu every night, each with around eight entrees to choose from. It feeds around 900 people at a time, and between 3,000 and 4,500 people a night.

The specialty restaurants feed around 150 people at a time and have set menus that remain the same every night, but together also offer 350 different dishes daily.

Menus are tweaked slightly based on customer feedback, but generally they remain the same having been developed by Royal Caribbean at its Miami headquarters months in advance.

The weekly food orders are also mostly constant, though these can change depending on the expected demographic onboard. For example, the holiday season sees around 2,000 kids onboard, making more kid-friendly meals a must.

One of the hardest parts of feeding passengers is that chefs must cater to guests with very different tastes, from passengers who are spending $50,000 a night on suites and want lobster and truffles to families who want nothing but mac and cheese and pizza.

De Silva’s team checks the quality of the food every day to see if it needs to be used earlier than planned. For example, broccoli ripening faster than expected could become a broccoli soup.

Generally, little is thrown out and leftovers are scarce. The world’s largest ship is a well-oiled machine after all. 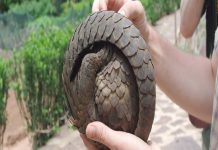 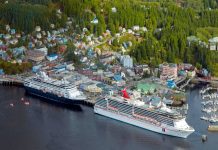 Will You Have To Wear A Mask on Your Next Cruise?

Mfame Team - July 15, 2016
0
Bulker Aground in Lake Superior Ana Cecilia was a boat that served humanitarian aid to Cuba, it also tried smuggling in $10 million worth...
Powered by Pojo Software Pvt.Ltd
This website uses cookies to improve your experience. We'll assume you're ok with this, but you can opt-out if you wish.Accept Read More
Privacy & Cookies Policy
Necessary Always Enabled