Ocean carriers could be forced to mothball more eastbound transpacific US west coast loops, and the vessels that operate them, to stop the extraordinary haemorrhaging of container spot rates which have halved in value in the past four weeks, says an article published in Loadstar.

According to today’s reading of the China-US west coast component of the Freightos Baltic Index (FBX), the spot price for a 40ft plunged 20% this week, to $2,361, compared with a typical premium rate a year ago of $20,000, a two-thirds decline since May.

Ships are reported to be leaving Asia for the US west coast barely three-quarters full, despite aggressive blanking by carriers, and spot rates are on track to fall through the $2,000 watershed next week.

And unless carriers take radical action to take out more capacity on the route, rates could dip below pre-pandemic levels before the start of the contract season, which will severely hobble the lines’ negotiating position.

Moreover, in the interim, BCOs sitting on contracts some four times higher than the spot market are said to be receiving ‘temporary’ rate reductions from carriers to keep their loyalty.

“It really is an eye-catching development,” he said. “Shippers that have had their backs against the wall in negotiations for so long are seeing the market turn much quicker than many anticipated. They can now move three 40ft containers for the price they paid for just one only a few months ago.”

Meanwhile, the erosion of spot rates between China and Europe also continued at pace, with Drewry’s WCI reading for North Europe losing 13%, to $4,724 per 40ft this week, and a more modest 6% decline for Mediterranean ports, to $4,912 per 40ft.

Despite shedding around 70% in value in the past year, spot rates to North Europe are, nevertheless, still 50% higher than in October 2020.

However, a UK-based carrier contact told The Loadstar this week that booking prospects for the coming weeks from Asia to North Europe were “dire”.

“Other than at the start of the pandemic, I can’t recall another time when the market has turned so quickly, and it looks like it will get a whole lot worse before it gets better,” he said.

Indeed, carriers are in no rush to send ships back to Asia, evidenced by the 2M’s decision to hold the 19,224 teu MSC Erica at Felixstowe for the duration of the second eight-day strike at the port, which ended on Wednesday. And the ULCV was kept company during the stoppage by an Ocean Alliance vessel, the 20,338 teu Ever Golden.

The only bright spot for carriers remains the transatlantic tradelane, which was initially behind the curve of the transpacific and Asia-Europe freight rate inflation, but subsequently saw rates spike significantly last year from $1,800 per 40ft to a high of $8,500 in August this year.

This week the transatlantic spot rate component remained stable across the indices, at around $7,500 per 40ft. 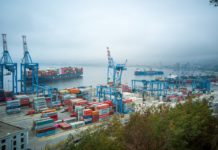 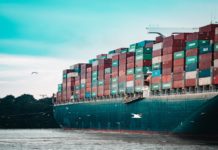