According to an article published on CNN and authored by Hanna Ziady, shipping companies are reducing traffic to help contain the spread of coronavirus.

The busiest port has fewer takers

Around 80 percent of the world’s trade is reliant on the oceans. Among the ports, China is considered to be the busiest port but however, the traffic is sparse as an increasing number of ships are placed in quarantine and many more are reducing their service.

Peter Sand, the chief shipping analyst at BIMCO, an international shipping association, “A closure of the world’s manufacturing hub impacts container shipping at large, as it is a vital facilitator of the intra-Asian and global supply chains. This will affect many industries and limit demand for containerized goods transport.“

Disruption to the industry has reverberated far beyond China as the country seeks to contain the coronavirus outbreak by keeping factories shut and workers at home.

The longer the health crisis lasts, the harder it will be to move goods around the world. The coronavirus outbreak has killed more than 560 people and infected at least 28,000 — mainly in China, where close to 60 million people are living in cities on lockdown.

Already, carmaker Hyundai has suspended production at its plants in South Korea because of a disruption to the supply of parts caused by the coronavirus outbreak in China, the company said in a statement.

The shutdowns mean that some ships can’t get into Chinese ports, as the loading and discharging of goods slows, said Guy Platten, secretary-general of the International Chamber of Shipping, a trade body. Others are stuck in the dock, waiting for workers to return to ports so that construction and repairs can be completed, Platten added.

Still, more vessels are idling in “floating quarantined zones,“ as countries such as Australia and Singapore refuse to allow ships that have called at Chinese ports to enter their own until the crew has been declared virus-free, added Sand. Platten said he knew of at least one crew that is running low on food because their ship has been idled for so long.

Giant shipping companies such as Maersk, MSC Mediterranean Shipping, Hapag-Lloyd and CMA-CGM have said that they have reduced the number of vessels on routes connecting China and Hong Kong with India, Canada, the United States, and West Africa. 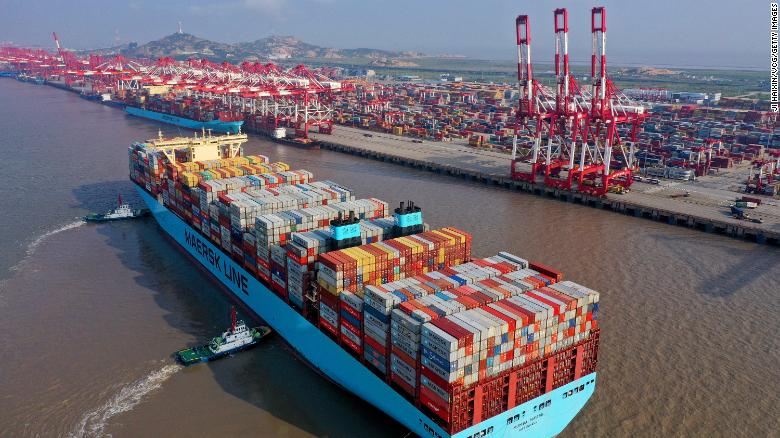 Tugboats guide a Maersk container ship at the Yangshan Deepwater Port, Shanghai.
The shipowners say that moves to idle Chinese factories beyond the end of the Lunar New Year has curtailed demand for vessels and forced them to adjust their capacity during what is already a low season for shipping because of the Chinese holiday.BIMCO members, which include 1,900 shipowners, operators, managers, brokers, and agents, report limited or no demand from Chinese buyers of seaborne commodities, such as coal, crude oil, and iron ore, said Sand. The lack of activity is reflected in oil prices, which have crashed into a bear market.Logistics company Freightos warned clients to expect delays in getting goods out of China and consider shifting some shipments from sea to air or even sourcing goods from other countries where possible. The backlog of shipments that typically follows the Lunar New Year will be made worse by the current situation, pushing ocean freight rates up and exacerbating delays, Freightos said.

Not only is the shipping industry affected, but the effect has also been felt by the airline industry.

According to a statement on its website, “IAG Cargo, the air cargo arm of British Airways parent IAG (ICAGY), has canceled all services to and from mainland China for at least the remainder of the month, citing a UK government travel advisory. German logistics group DHL has reported severe disruptions to inbound and outbound air cargo shipments, trucking and rail cargo services.“

The shutdown has also affected supply chain operations and production in China. The impact has also been felt in other industries such as automotive, pharmaceutical and medical supplies, and high-tech manufacturing.

DHL has suspended deliveries in Hubei province, the epicenter of the virus, but said it doesn’t foresee other changes to its operations.

Moreover, UPS (UPS) and FedEx Express (FDX) said they continue to fly into and out of China. UPS said it has seen reduced demand for its services as a result of business closures. Mfame Team - November 27, 2018
0
Russia's Federal Security Service has released video footage purporting to show an incident between the Russian coast guard and Ukrainian ships in the Kerch...
Powered by Pojo Software Pvt.Ltd
This website uses cookies to improve your experience. We'll assume you're ok with this, but you can opt-out if you wish.Accept Read More
Privacy & Cookies Policy
Necessary Always Enabled