A recent news article published in the G Captain states that American Seafarers Recognized for Bravery at Sea.

During its recent 53rd annual AOTOS awards ceremony, the service recognized the officers and crew of four American-flag vessels for heroism at sea. Here are their stories:

The American-flagged container ship CGA CGM Herodote was sailing from Saipan to Japan on March 21, 2022 when the crew saw smoke on the horizon. Immediately changing course, Ship Master Donald Moore sent his ship to investigate.

Approximately eight nautical miles away, they discovered a Japanese fishing vessel, Yuujin Maru 51, completely engulfed in flames. The 55-foot fishing trawler was burned from the superstructure to the waterline eradicating visible name and designating marks, and the Herodote saw no signs of survivors.

The Herodote launched a search pattern 100 miles off the Japanese coast near Tanegashima Island, Japan to scan the area for signs of survivors, while calling for assistance from other merchant vessels in the area and the U.S. Coast Guard Command Center in Hawaii, while coordinating with the Japan Coast Guard. The M/V Woodside Rogers, a Greek-flagged tanker, responded, assisting in the search.

The Herodote searched for seven hours, spotting three fishermen in the frigid waters. The three men were the only survivors of a crew of eight. The Greek tanker transported the men to safety.

Captain Donald Moore and his CGA CGM Herodote crew were awarded the Coast Guard Certificate of Merit by the U.S. Coast Guard Sector Guam. The award was presented at Coast Guard Micronesia Sector headquarters in Guam by USCG Captain Nick Simmons. Simmons, in praising the Herodote crew, said “The efforts of Capt. Moore and his crew honor the nautical tradition of assisting fellow mariners.

“Their bias for action and commitment were on display that day. Merchant mariners are an integral part of the global search and rescue enterprise, and especially in the vast Pacific, they are essential to saving lives.”

The American tanker Maersk Peary was steaming across the Aegean Sea north of Crete en route to the Suez Canal the evening of December 22, 2021, when Rescue Center Piraeus in Greece requested urgent assistance finding a capsized vessel with about 80 people on board.

The Maersk Peary was less than 14 miles from the downed vessel, and made immediate course changes to enter a search grid established by Greek Coast Guard, arriving in minutes. The ship’s master, Everett M. Hatton, began maneuvering slowly into the zone while his crew mobilized a launch crew with its rescue boat. An hour into the search, with searchlights scanning the waters, Captain Hatton spotted a white object in the water.

The Third Mate and Bosun zeroed in on the object with binoculars as the 590-foot Maersk Peary cut its engine, launched the rescue boat loaded with blankets and proceeded toward the object later identified as a boat fender, and found a survivor clinging to it. The Chief Mate tried to communicate with the man, but the exhausted man was shivering and unable to speak. The man was pulled from the chilly waters and onto the rescue boat.

With 15 minutes, about 2230, the Maersk Peary rescue boat linked up with the Greek Coast Vessel OSP707 and transferred the survivor. The American ship continued its grid search for another four hours before being relieved by Greek Search and Rescue Command.

Authorities rescued 62 of the estimated 80 migrants aboard the sinking boat. Sixteen bodies were recovered from the water. The migrants are believed to have sailed from Turkey.

Captain Hatton lauded his Maersk Peary crew for their professionalism and rapid response to an emergency situation. The Maersk Peary had just finished loading fuel to be delivered to McMurdo Sound in Antarctica.

The S/S Pacific Tracker was sailing off the coast of California when the call came from the CG Rescue Coordination Center Alameda: Locate the sailing vessel S/V Perplexity somewhere near you more than 500 nautical miles off the coast! Aboard the S/V Perplexity was an injured sailor bleeding uncontrollably, too far from the Southern California coast to be reached by helicopter.

S/S Pacific Tracker made an immediate turn and began the search for the tiny sailing vessel about 100 miles away. The S/S Pacific Tracker, a research/survey ship operated by TOTE Services, is used in gathering telemetry for ballistic missile tests, was looking for the proverbial “needle in the haystack” to locate the Perplexity, which had been participating in a race, and rescue the sailor. Hours later, at approximately 1845, success: the 6 meter x 1 meter sailing vessel was in sight.

Launching a fast work boat, crew from the S/S Pacific Tracker plucked the seaman, who had been experiencing an uncontrolled nose bleed for several days, from the sailing boat and on board the much larger vessel. The sailor’s condition was immediately stabilized, while the vessel turned toward the California coast to facilitate a MEDEVAC transfer. While the Pacific Tracker was steaming to the shoreline, its crew was in contact with the U.S. Coast Guard and doctors at GWMMA.

Once closer to the coast, mid-morning July 12 a U.S. Coast Guard helicopter reached the S/S Pacific Tracker and MEDEVACED the now stable patient and transferred him to a shoreside hospital.

The actions of the S/S Pacific Tracker crew is in the highest dedication to maritime safety and rescues, and reflects great credit upon the Missile Defense Agency, the Maritime Administration, and the U.S. maritime industry.

A humanitarian disaster was averted and the life of an infant saved as the USNS Yuma was on routine operations when it received a call to assist. The ship raced to the scene where a Maltese tanker, the MT Nore, was struck by a distressed vessel carrying migrants it was towing was taking on water following the accident. With more than 90 migrant men, women and children, on board, the vessel had begun sinking following the collision.

USNS Yuma, joined by Italian warship ITS Libeccio, deployed its rigid inflatable boat to render assistance, rescuing 35 male migrants who were provided life jackets, food, water and basic medical care. Families were pulled aboard Libeccio, where they had a four-month-old girl who was ‘ashen and responsive’. USNS Yuma, at Libeccio’s request, raced its MilDet Nurse Practitioner over, then made another shuttle run with medical supplies. The medical officer was able to stabilize the baby before returning to USNS Yuma.

All the migrants were rescued and the 35 aboard USNS Yuma were transferred to a Maltese patrol boat while Libeccio, with the other 58, raced toward Italy where a MEDEVAC flight could pick up the critically ill child.

USNS Yuma resumed its patrol in the U.S. 6th Fleet Area of Responsibility. The seamanship, professionalism and selflessness of the crew of USNS Yuma is representative of the thousands of civil service mariners who are sailing ships for the U.S. Navy’s Military Sealift Command. 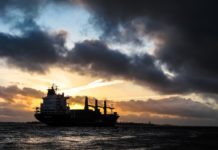 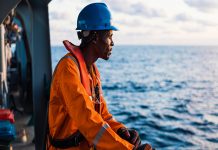