A bulk carrier was heading towards its discharge port where the new Captain who joined the vessel took over the command from the old one who was on board the ship for the last eleven months.  The vessel fully loaded with steel products approached the pilot station, where the pilot card and other formalities were perfectly followed.  The weather was a bit rainy, however, the visibility was clear.  The Master described the manoeuvring characteristics and the pilot checked to confirm there was an anchor watch forward, which was a requirement.  The vessel proceeded up the river under manual steering with proper lookouts positioned.

As per the company SMS, the 3rd engineer, who was supposed to be stationed in the emergency generator room as standby, swapped his role with the 2nd engineer, who was in the engine room.  This was done with an intention to provide an opportunity to the growing engineer to experience other parts of engine room during manoeuvring.

The 3rd engineer was doing his rounds on the fuel treatment area when he noticed excessive differential pressure on the fuel filter.  Without consulting anyone he decided to carry out a manual back flush after switching from one fuel filter to another.  He moved the switch-over lever only part of the way, which resulted in the fuel flow to the main engine and auxiliary engines being interrupted and leading to a total blackout.

The Chief Engineer and the rest of the engine room watch acted immediately but it usually takes 10 – 15 minutes to recover from a blackout.  At the time of the blackout, the vessel was altering course to port for a major turn of almost 90 degrees.  There were no other vessels underway in the area.

The master ordered full astern on the engine telegraph but nothing happened due to the blackout.  He realized that he had no engine control, the main engine revs were falling, there was no steering control and the vessel still had some port rudder.  The vessel was moving at about ten knots.

In front of the vessel, there were some smaller vessels moored at the quay.  The pilot ordered starboard anchor to be dropped but it had no effect. The pilot ordered the fog signal to be sounded.  He also called the berthed vessels on the VHF and the VTS and he ordered the port anchor to be dropped.  Both anchors were dropped and the vessel was slowing down a bit.  Shortly afterwards the vessel made contact with the quay at approximately 7 knots and continued alongside, hitting one of the vessels berthed alongside before proceeding out into the river again.  The berthed vessels’ moorings parted, one snapping back and damaging a vehicle parked on the wharf.

The berthed vessel drifted away from the berth as own vessel wedged between it and the wharf, still making headway and scraping along the wharf, where it finally grounded.

This case study is extracted from the monthly safety scenario issued by the Swedish P&I Club.  The Swedish Club publishes on a monthly basis a new “Monthly Safety Scenario” (MSS) to assist owners in their efforts of complying with the maritime regulations.

Image Credits: Jim Hylatt – This image is for representation purpose only.  This does not form a part of the case described above. 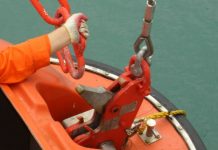 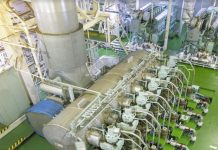 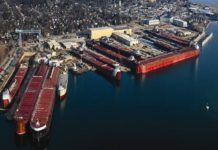