Policymakers in Europe and the US are racing to counteract early Chinese dominance of electrolyzers, a key piece in the next generation of clean energy.

A decade ago, China used low prices to dominate solar manufacturing, wiping out Western competitors just as worldwide demand for panels started to soar. The US and Europe are determined not to let the same thing happen with hydrogen.

As the world sprints to decarbonize, the next round of competition revolves around a device called an electrolyzer. Plug these into clean electricity such as solar power, and it’s possible to extract hydrogen from water without producing any planet-warming emissions. That’s a crucial step in creating a green fuel capable of decarbonizing such industries as steel, cement or shipping.

Companies around the world are already revving up electrolyzer production, green hydrogen plants are under construction, and the industry is finally making the leap from pilot projects to industrial scale. BloombergNEF, a clean energy research group, estimates worldwide electrolyzer production will need to grow 91 times by 2030 to meet demand. But many Western clean tech veterans eye the emerging competition with a queasy feeling of déjà vu. More than 40% of all electrolyzers made today come from China, according to BNEF.

Read More:  Why Hydrogen Is the Hottest Thing in Green Energy: QuickTake

President Joe Biden served as vice president during the crucial years when China seized the lead in solar manufacturing. Now he views China as a competitor more than a supplier, and he has made bringing clean tech manufacturing back to the US a pillar of his climate policies. The US is determined not to let China control this new energy boom, and Biden’s  Inflation Reduction Act showers money on domestic hydrogen production.

“The reality is, the US is going to give very generous subsidies to ensure that local suppliers survive,” Wang said.

Europe has its own reasons for wanting a piece of this nascent industry.

Russia’s invasion of Ukraine has driven home the value of fuel that can be produced within Europe, and it has ramped up the continent’s ambitions for hydrogen. And yet, some hydrogen advocates say the European Union isn’t following through, putting it at a disadvantage to both the US and China. The union has set a target for green hydrogen production – 10 million tons per year by 2030 — but has not yet decided which methods will qualify as “green.” That makes it hard for companies to commit to the big hydrogen production projects that would drive electrolyzer orders.

“I’m scared the market shares in the electrolyzer business will be taken away from Europe and shipped to other geographies,” said Jorgo Chatzimarkakis, chief executive officer of the Brussels-based lobbying group Hydrogen Europe. “The EU are shooting themselves in the head. Not in the foot—in the head.”

Meanwhile, many analysts expect the efficiency of Chinese electrolyzers to improve, eroding any technological advantage US and European companies now have.

“I have no doubt that China is working on better electrolyzers,” said Bridget van Dorsten, senior hydrogen analyst at the Wood Mackenzie research and consulting firm. “The day that China decides not to be a laggard anymore is the day they aren’t a laggard anymore.”

And some Chinese companies have a head start. Chemical-equipment manufacturers there have made electrolyzers for years, installing large-scale water electrolysis systems for various manufacturing industries such as polysilicon production for solar cells.

Electrolyzers use electricity to split water into hydrogen and oxygen, and versions of them have been on the market since the 1920s. Many countries now see hydrogen as the best bet for decarbonizing industries that can’t easily run on electricity. If an electrolyzer’s power comes from a solar or wind facility, or a nuclear reactor, the process of producing the hydrogen is also carbon-free. 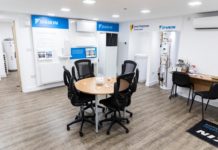