The Pioneer of Belfast floats silently and smoothly over the water, leaving a minimal wake in its wake, as reported by BBC.

The advantages of flying above the waves may be seen even in strong winds and waves, according to Katrina Thompson, programme director at Artemis Technologies.

The Pioneer is the first electric foiling workboat to be commercially available and was created by Artemis Technologies.

The foil, which resembles a pair of wings under the boat, elevates the hull out of the water to significantly reduce drag.

According to Artemis, when combined with an electric motor, the result is a ship that uses 90% less fuel and emits no emissions.

Dr Thompson grew up in the hustle and bustle of heavy industry in Sailortown, Belfast. While her parents worked on the boats, she spent her childhood playing on the docks.

She moved away from Belfast to pursue a career as an aeronautical engineer, creating planes for Rolls-Royce and Bombardier. She then returned to her roots while bringing her knowledge with her.

“My dad couldn’t understand it,” says Dr Thompson. “Then I showed him the underneath of the boat. He said, ‘Well, it’s a wing’.”

Aeronautical engineers, experts in flight controls and physics modelling, as well as naval architects, are all brought together by Artemis.

According to Dr Thompson, the 11.5-meter-long Pioneer is perfectly suited for moving staff to and from offshore wind farms.

“They have to push against the wind to get out to the farms and stay there while the crew disembark. It’s a power-hungry manoeuvre.”

Shore erosion, habitat loss, and coastal deterioration are all results of the wake left behind by maritime activity. Due to its absence of wake, Artemis is able to operate closer to the harbour and at higher speeds than previous ships, guaranteeing thus much shorter travel times.

“We are working in an industry that is traditionally slow to adopt new technologies,” says Dr Thompson. “If we start now, we can make a smoother journey towards decarbonisation.”

The majority of international trade is transported by sea. Nearly 3% of all worldwide emissions are attributable to the international maritime sector. It would rank as the sixth-highest emitter in the world if it were a nation.

In 2018, the International Maritime Organization (IMO) established 2050 as the deadline for a 50% reduction in emissions from 2008. Experts contend that the objective should be 100% in order to keep global warming to 1.5C.

So, can the shipping industry clean up its act?

Boats can run on batteries over short distances, but for international transportation, green hydrogen-based fuels are expected to play a key part in decarbonizing the sector.

However, switching to hydrogen would call for modifications to the fueling system. The adaption of the ships themselves to enable them to run on hydrogen is a challenge, as are cost and storage.

Some researchers are developing radical technology to address the issue.

According to specialists at Cambridge University, synthetic photosynthesis (syngas) could close the energy gap between fossil fuels and pure hydrogen.

“Syngas, a mixture of hydrogen and carbon monoxide, is an important industrial intermediate in the production of conventional fuels like gasoline,” says Dr Virgil Andrei, a research fellow at the University of Cambridge. “If we can produce syngas sustainably, we won’t need fossil resources.”

As a punt floats down the River Cam, past St John’s College and under the Bridge of Sighs, tourists converse. The lake is glistening in the sunlight, its surface covered in the golds and reds of autumnal foliage.

The odd leaf stands out. Dr Andrei protects it from an apparent hungry fowl.

The plastic cover, he says, should be strong enough to prevent animals from consuming this unusual leaf.

“In fact, covering the water surface up to a certain extent, around 50%, does not affect wildlife, and may even provide benefits – like preventing water evaporation from irrigation canals,” Dr Andrei adds.

At Cambridge University, Dr Andrei and his colleagues have created artificial leaves that can produce clean fuels from water and sunshine and may someday be used extensively at sea.

According to Dr Andrei, ultra-thin, flexible devices are inexpensive, self-sufficient, and float, so they might be used to produce a sustainable substitute for gasoline without taking up any space on the ground.

“You could have decentralised fuel production in remote areas – on shorelines, on lakes, near islands. We could have refuelling stations for ships.”

This is the first instance of clean fuel being produced on the water, and if the artificial leaves are scaled up, they might be utilised on polluted canals, in ports, or at sea – reducing the dependency of the world’s shipping industry on fossil fuels.

While that technology is still a long way from being used, other approaches to shipping freight that have existed for ages are being revived.

Sailcargo, which was established in 2014 in the mangroves of Costa Rica, is led by Julia Milmore.

At its shipyard in the country of Central America, it is constructing its flagship, the Ceiba. It is scheduled to depart in 2024.

The 45m long ship is classified as a schooner in the sailing community since it has three masts.

It can carry 250 tonnes of cargo, which is roughly equivalent to nine standard shipping containers.

“Once built, she will be the largest clean cargo vessel in the world,” says Ms Milmore.

“The crew know that with every strike of a hammer or pull of a rope, they are contributing to a much larger mission – bigger than the ship itself.”

The Vega Gamley, another renovated ship that was acquired from a Swedish family that had owned her for many years, is prepared to transport organic Fair Trade coffee between the Americas.

The Vega will make up to eight journeys a year between Santa Marta, Colombia and New Jersey in the US. Each journey will last 16 days, plus an additional 6 days at ports.

“We can’t compete with the speed of fossil-fuelled transport, but it only takes one look at the map of active ships to see the weeks-long waiting times outside of ports across the world,” says Ms Milmore.

Her sailing ships, some of which hold more than 20,000 containers, can only transport a minuscule portion of the cargo of a contemporary container ship.

However, Ms Milmore asserts that her smaller boats may bypass the traffic jams that beset the shipping sector.

“Consumerism has grown beyond the infrastructure. Our ships are able to bypass this due to our flexible unloading and loading operations. We are detaching ourselves from the market that has let our environment down.” 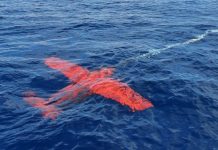