Recently the UK P&I Club conducted a webinar to discuss key issues that are affecting the shipping market now. Here’s what Viswa Group wants to highlight from that webinar.

What is being done about it?

Questions from the audience:

Q: Cargo planners often partially load the ship which results in high GM values and a “stiff ship”, i.e. short rolling period, which increases the risk of container loss. Are there any suggestions as to how this might be avoided?

A (Neil Gardiner): Re-stowing will have to be a part of any solution, so there is no cheap option.

Q: Is there difference in failure of loose lashings with fixed deck arrangements?

A (Neil Gardiner): Haven’t been observed. Both take similar working loads and have similar problems. Preventative maintenance is the key.

Q: During managing casualties, what is the advice in dealing with authorities?

A (Neil Gardiner):  They try to be helpful, but resources they involve in the matter are very limited. As a result, quality of produced reports is not perfect, carriers often spend a lot of time fixing their misjudgment.

Q: What is the most difficult part in managing disputes and preparing for litigation after the loss of cargo?

A (Tom Starr): Number of parties involved and them being scattered around jurisdictions.

Q: What is being done with mis-declared dangerous goods cargo?

A (Neil Gardiner): First of all deliberate mis-declared happens just as often as simply mistakes. Trust plays a large role in the process. Currently it relies largely on the ability of lines to identify that. 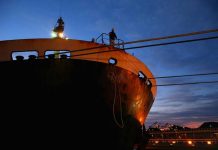