At this temperature, aluminum, copper, gold and iron would have melted. Stainless steel and carbon steel would glow red.  Your Thanksgiving turkey would turn into a charred mess in a second. What is so significant about 2,000 degrees? Did you know many hydraulic systems can create temperatures in this range?

Most people are familiar with diesel engines and how they work, which includes a rapid compression of air.  When you inject a fuel source, it creates an explosion.  Did you know that micro-dieseling is similar?  A front-end loader that runs a diesel engine is a macro level (or big picture) of what it does on the micro (or smaller) level in a hydraulic pump. As oil enters the suction side of the pump it is subjected to the lowest pressure in the system.  Dissolved air is released from the oil.  As the oil travels through the pump, the pressure increases rapidly which causes rapid air bubble compression.  This process of rapid air compression in the presence of a fuel source basically describes how a diesel engine operates.  This phenomenon without the thermal event is also called cavitation.  You may not hear micro-dieseling occur unlike most severe cases of cavitation.  It may be subtle, but if your hydraulic oil is darkening during use, there is a thermal event occurring and there is a good chance it is micro-dieseling.

Cavitation is the process of formation of bubbles in a liquid, typically by the movement of a propeller through it.  If the gas bubbles pass through a high pressure zone, they will violently collapse. This alone can cause serious reliability issues with the machine component in terms of vibration, noise, surface damage and potentially failure.

What is micro dieseling?

Micro-dieseling in simple terms is a pressure-induced thermal degradation.

An air bubble transiting from a low-pressure area to a high-pressure area as it passes through the pump.  The rapid compression of these air bubbles around a fuel source, hydraulic oil, generates an enormous amount of heat and causes thermal breakdown of the oil surrounding the air bubble. Micro-dieseling is caused when an air bubble in the oil is rapidly and adiabatically compressed causing extreme local temperature increases.  An air bubble will move from a low or negative pressure area to a high-pressure zone and through adiabatic compression get heated to very high temperatures.

Checkpoints to determine the cause of air build-up:

Keep this in mind.  If your oil darkens, there is a thermal event occurring in your system.  It could be a result of micro-dieseling.

Compare Fresh hydraulic oils with a representative oil sample drawn from the system. The Visual appearance will tell you what we mean. 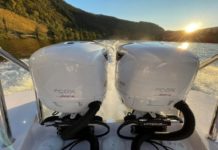