In the past of couple weeks, market rates have softened despite the holiday period. This has raised a question on the ships having been quietly fixed, particularly ex-MEG. Another vital question is whether rates have found support at their present levels, reports the Tanker Operator.

What type of ship fixing?

Some 60 fixtures were concluded ex-MEG for January loadings but volumes are still lagging both in West Africa and ex Americas, areas where we have seen an increasing number of ships ballasting on spec, Fearnleys reported.

Therefore rates are likely to remain under pressure for now.

Suezmax tonnage has been building up over the past two weeks, as activity slowed due to the holiday season. Rates have gradually eroded and the owners’ recent gains have dissipated.

TD20 is currently trading at WS110 and is expected to soften further in the coming days, however, owners’ TCE is being helped by falling bunker costs on the back of weaker oil prices.

The delays in the Turkish Straits are steadily increasing. Currently, the Canakkale canceling is 21 days, which is likely to have a steadying effect on Black Sea business as ship availability for forward dates will be thinner and uncertain.

Many vessels are currently ballasting from the Far East. This excess tonnage has to be earmarked for West Africa and the MEG.

North Sea and Baltic Aframaxes faced softening rates during the first working day of the new year. Fixtures are  still being concluded on the basis of 2018 flat rates and rates are expected to soften a bit more, despite other markets such as the Caribbean and the Mediterranean offering a better alternative.

Moving into 3rd decade fixing window from the Baltic, the weather will get colder and we could see ice restrictions valid for all Russian Baltic loading ports with a bit more upward pressure on rates.

At the time of writing (Wednesday), the Black Sea/Mediterranean route is achieving WS207.5 (2018).

With the festive season now behind us, we have to wait and see who will be the first to test the market using Worldscale 2019 rates.

With the potential of further delays around the Black Sea, owners will make every effort to maintain pressure on rates in the coming week, Fearnelys concluded.

Just before the holiday period, brokers reported that Teekay had fixed the newbuilding LR2s ‘Prostar’ and ‘Prosky’ for two years at $20,500 per day.

Several newbuilding orders have been reported during the past couple of weeks.

They included up to four scrubber fitted VLCCs for Navios at Imabari for 2020/2021 deliveries.

Chinese First Ship Leasing was said to have ordered two, option two, Aframaxes  at COSCO Hi Yangzhou at a cost of $48.8 mill each for 2021 delivery.

On 28 December, 2018, Sovcomflot (SCF Group) placed an order at Zvezda shipbuilding complex to build three MRs that will use LNG as their primary fuel source.

They will ship petroleum products and gas condensate under a long term charter to Novatek.

Each tanker will have an Ice Class 1B notation, enabling them to operate in areas with challenging ice conditions, including the Baltic, SCF said.

In addition, Pacific Carriers were said to have ordered two, option two, MRs at STX for 2020 delivery.

The contract covers two firm orders plus two options for the FKAB-designed ships.

The Ice Class 1A tankers will be fitted with 14 cargo tanks and were designed specifically for the harsh weather conditions in Northwestern Europe.

They will be powered by 4-stroke main engine connected to controllable pitch propellers (CPP). The ships will be LNG and dual fuel ready for gas and methanol, FKAB said. They are designed for very low fuel consumption at an economical speed of 12.5 knots at the design draught.

In the S&P sector, before the holiday period, brokers reported that Fuyo Kaiun had purchased the 2010-built MR ‘Nord Inspiration’ for $16.75 mill. 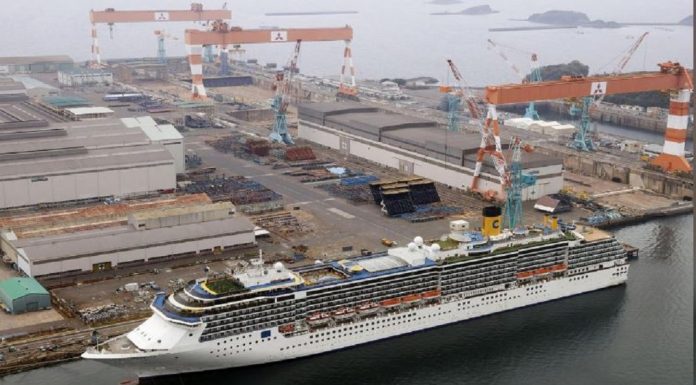 Authorities Shut Down A Crowded Cruise After Photos Go Viral

[Infographic] What Should the Supply Chains Do To Cope With COVID19 Implications?

Maersk Admits The Problem Of Sexual Assault In Their Firm