The mechanism of surface rolling contact fatigue in rolling bearings is investigated by means of dedicated experiments and numerical simulations of the damage progression.  Rolling contact fatigue (RCF) is a typical failure mode in rolling bearings and similar types of machine components.  The fundamental work in RCF is due to Lundberg and Palmgren. 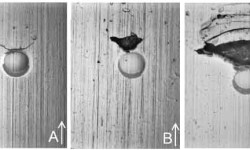 In this article, the progression of SRCF is investigated by modelling the contact and the interaction with deviations of the surface micro-geometry that generate stress concentrations.  Comparison of the numerical simulations with a set of experimental results indicates good correlation, allowing the formulation of a hypothesis about the underlying mechanisms of SRCF, as well as its inception and growth in rolling bearings.  This new knowledge fits very well with the basic idea behind the SKF Generalized Bearing Life Model (GBLM) that separates surface from subsurface fatigue damage. 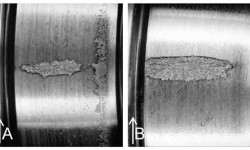 Often, rolling contact fatigue damage originated around surface micro geometry features develops into a spall. Spall propagation, in its advanced form, is strongly inﬂuenced by macro geometry aspects – for example, the evolution of the raceway contact geometry and resulting overall stress ﬁeld in a rolling bearing.  A recent investigation carried out by the present authors has studied SRCF propagation of pre-dented rolling bearings, both with a model and experiments, concluding that the mechanisms involved in ball bearings require the consideration of lubrication conditions and the interaction of stresses between the surface and subsurface to understand the development of the typical V-shaped cracks along the raceway, differently from the initial transverse damage growth observed in roller bearings that can be explained sufficiently with only dry contact assumptions.  Experimental observations in damage progression. 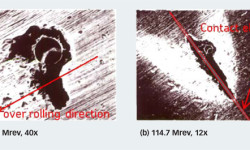 From the theoretical and experimental investigations found in the literature, at least two distinctive spall propagation phases from surface defects are clearly recognized. 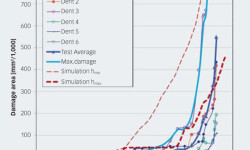 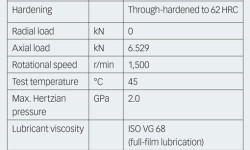 In the simulated results the mechanism of the damage progression is also interesting.  Because the indentation is a bit larger than the Hertzian width in the rolling direction, the most loaded zone in the raceway is the lateral area of the indentation, where the damage indeed will initiate and progress. 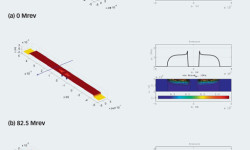 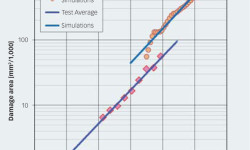