When two vessels head in the same direction on crossing routes, the obvious result is the collision. That is what happened when the cargo ships violated the ColReg in Oster estuary on Elbe River on 5 nautical miles off Cuxhaven, Germany.

The collision caused one general cargo ship, to get stuck into a sandy shallow at the estuary. Both the vessels suffered slight damages and small scratches but remained afloat. The general cargo ship was refloated later with the assistance of a tug. Both the merchant ships were docked at Cuxhaven for inspection and survey, before being released to resume voyage. There were no injury nor water pollution. 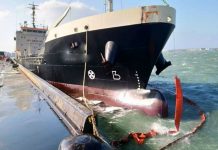 Mfame Team - February 17, 2016
0
Watch a cargo ship running into the riverbanks after losing control because of strong water turbulences, caused by violent river currents. Disclaimer: This video...
Powered by Pojo Software Pvt.Ltd
This website uses cookies to improve your experience. We'll assume you're ok with this, but you can opt-out if you wish.Accept Read More
Privacy & Cookies Policy
Necessary Always Enabled