Greek scientist Konstantinos Giapis has finally solved the mystery of the Hindenburg disaster, the destruction of the largest aircraft ever built by mankind, on May 6, 1937, in Manchester Township, New Jersey, reports the Greek Reporter.

The Hindenburg disaster was an airship accident that occurred in the stormy skies of New Jersey on May 6, 1937. It is the largest aircraft ever built by mankind and the towering example of technological prowess at that time.

According to the news website Greek Reporter, the airship was preparing to land after a three-day voyage across the Atlantic Ocean from Frankfurt, Germany when suddenly it erupted into flames and consumed the entire airship, killing 36 people on board.

Even almost after one hundred years, it has remained one of the most iconic tragedies of the 20th century alongside other disasters, such as the tragedy of the Titanic, the Challenger explosion, and the Chernobyl nuclear reactor meltdown.

But perhaps the Hindenburg disaster remained a source of fascination is because of its enduring mystery that surrounds them for the past eight decades.

The Zeppelin airship, named after its designer Zeppelin Company, contained seven million cubic feet of flammable hydrogen. In other words, it was like a cigar-shaped balloon filled with explosive gas.

Caltech professor Konstantinos Giapis said that a combination of hydrogen and oxygen in the air, and a source of ignition could create a bomb, Caltech reported.

The mystery of its explosion has not been answered for many years, although some experts have theorized that Hindenburg’s engines that burned diesel fuel were responsible for the explosion. Others also said that it was an act of sabotage to make the government of Nazi Germany look bad.

But a more reliable theory suggests that it was because of an electrostatic discharge, the same shock that happens when a stocking fee rubs on a carpet and touches something metallic. The Hindenburg might have been zapped during its landing which could have set the gas afire if the hydrogen was leaking.

However, there are some loopholes in this theory. The zeppelin did not catch the fire the moment it dropped its ropes to the ground as it would have expected, and the chances of a single spark at the same spot where hydrogen was leaking are too slim.

Giapis has created a model of zeppelin to resolve the two loopholes in this theory and finally get to the bottom of the mystery.

Building A Model of the Airship

The extensive background of Giapis in studying how electrical charges move on surfaces and how they could build up to sufficient levels to ionize the air and cause sparks has proven to be useful in solving the eight-decade-long mystery of the Hindenburg disaster.

He built a model of the airship to demonstrate how it exploded. Giapis said that after the ship was grounded, it became more electrically charged, acting as a giant capacitor that could store enough electrical energy to spark the hydrogen gas.

It gained electrons from the Earth’s surface when the mooring ropes were dropped which resulted in a positively charged skin and a negatively charged frame, the Greek Reporter news website reported.

Giapis pointed out that hydrogen was already leaking from one specific location in the airship, but a single spark on the ship that is hundreds of feet away would not cause an explosion.

“That means the giant capacitor was actually composed of multiple smaller capacitors, each capable of creating its own spark. So I believe there were multiple sparks happening all over the ship, including where the leak was,” he said in Caltech’s news release.

In a demonstration, Giapis charged his airship model of the skin to an electrical voltage that mimics the atmospheric charging in stormy conditions. Then, he grounded the frame but observed that nothing happened.

So, he sprayed a mist of water that simulates the light rain that was falling that night. Within a few seconds, loud and powerful sparks jumped across the gap between the skin and frame. 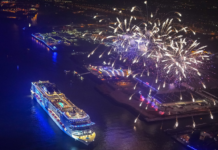