The wreck of a warship is regarded as a war grave and military property when it sinks and lives are lost. Naturally, many ships sank during World War II, some of which carried their whole crews to the bottom of the sea as reported by List Verse.

In 2016, when touring numerous places, sonar discovered an unsettling pattern. Numerous vessels and submarines have disappeared without a trace. The entire event was perplexing at first, especially when you consider the enormous size of these submerged warships. The solution was soon discovered by a sudden rush of ship-related materials at scrap yards. As it turns out, warships are the target of metal pirates. It’s simple to understand why.

A single bronze ship propeller is worth approximately $5,000, while a full wreck will yield enough metal to pay you $1,000,000.

The victims of this trade go beyond American warships. Additionally, metal pirates pillage Australian, Dutch, British, and Japanese warships, occasionally at great personal risk to themselves. 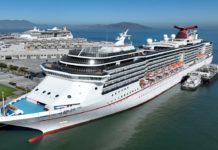